The Wendy Roche-trained enigma Nettoyer has returned to Group 1 winning form with last year’s Doncaster Mile champion taking out the 2021 Queen Of The Turf Stakes in an upset on Day 2 of ‘The Championships’. 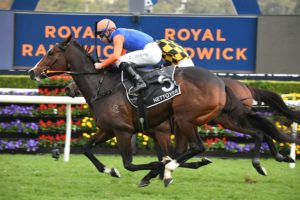 Last Sydney Autumn Racing Carnival the Sebring mare backed up from a fourth behind the UK champion Addeybb in the Ranvet to win the Group 1 Doncaster Mile (1600m) at big odds on a Heavy track.

She then finished a disappointing 12th on quick back-up in the Group 1 Queen Of The Turf Stakes results behind Con Te Partiro, but atoned for that with her shock win in 2021.

Since saluting in the Doncaster Mile, Nettoyer had 10 starts for just the one top three performance when runner-up to Think It Over in the Group 3 Craven Plate (2000m) last October before her second Group 1 success.

She was ninth last weekend when failing to defend her title in the Doncaster, but there were excuses as the now seven-year-old missed the kick and made up plenty of ground to finish only four lengths off Cascadian.

Nettoyer went around at a big price for the Queen Of The Turf Stakes at the same track and distance back against her own kind, and was on her best behaviour for jockey Tommy Berry.

“I think getting her to the barriers is the hardest part,” Berry told Channel 7TWO post win.

“I think once she’s in one of those (good) moods, she’s at her best.

“I was very confident a long way out as she was just going so well.”

It was the Jamie Richards-trained favourite Probabeel ($2.15F) who was in front on the home straight after running past the leader, eventual last past the post Greysful Glamour, and looking every bit like saluting for the punters before Berry came with a huge late charge on the gutsy Nettoyer.

Having been stoked up into third and then first when responding to the urges of hoop Kerrin McEvoy, Probabeel looked well clear the final furlong.

But Nettoyer came home hard late, going past the well-supported favourite for a last-stride victory and really attacking the line well, a wonderful result for Roche after connections had to pay the $22,000 late entry to get the mare into the race.

“She always backs up super.

“I was confident but nervous.”

Fellow roughie Quantum Mechanic ($26) was also good late finishing two lengths back third the outside to round out the Queen Of The Turf Stakes trifecta.

Roche confirmed plans to keep Nettoyer in work now with the mare previous up for a broodmare sale with the Queensland Winter Racing Carnival riches waiting.

After that, a potential date with top sire Exceed And Excel awaits Nettoyer.

“She’ll probably go to the Hollindale, then the BTC Cup (Kingsford-Smith Cup) and then off to Exceed And Excel.”

2021 Queen Of The Turf Stakes Results