A return to the Randwick mile and a step-up in grade for the Group 1 $500,000 Champagne Stakes (1600m) Saturday week could be on the cards for the Gai Waterhouse & Adrian Bott-trained Converge following his easy win in the 2021 Fernhill Mile. 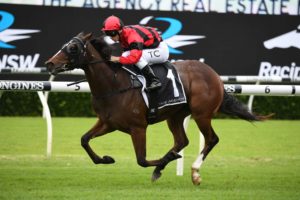 Converge is into the Group 1 Champagne Stakes following a strong win in the Fernhill Handicap. Photo: Steve Hart.

Kicking off Day 2 of ‘The Championships’ at Royal Randwick, the nicely-bred Frankel gelding was the easing favourite in the first getting out from $2.80 to $3.40 in the markets for this year’s Fernhill run as the Listed $150,000 The Agency Real Estate Mile (1600m).

The progressive bay presented fit third-up and was good dropping in class but going up in distance following two nice lead-up runs in tougher company at Rosehill.

After a winning debut in December at Warwick Farm, Converge was eye-catching first-up running only a length back sixth to Shaquero in the Group 3 Pago Pago Stakes (1200m) as a 30/1 outsider.

He improved second-up with Tim Clark aboard for his second behind Saif in the Group 3 TL Baillieu Handicap (1400m) and the duo combined again for the breakthrough Black-Type win in the Fernhill.

Going up a kilo to carry the 58kg top weight in this year’s event, Converge jumped well and was first into stride.

Clark didn’t want the lead however and allowed Rachel King aboard the Bjorn Baker-trained Maurice’s Medad, the Maurice colt coming off a last start win at Hawkesbury, to press ahead on the outside.

It was a patient and smart ride by Clark who travelled sweetly in second throughout before hitting the button 300m out from the line.

Maurice’s Medad was still in front around the turn, but Converge moved up quickly and was going well breaking clear inside the 150m and running away with the win in a strong finish.

The bookies had been keen to lay Converge ($3.40F) but he proved himself with a one and a quarter-length win over Maurice’s Medad ($3.70), while the fellow Baker-trained Akahata ($6) stuck on well for a close third.

The Fernhill Handicap has in recent years served as a nice lead-up into the Champagne Stakes on All Aged Stakes Day with the winner exempt from ballot for the Group 1.

The all-in 2021 Champagne Stakes odds – available in full here – on Converge to do the double for the first time since Prized Icon (2016) firmed in from $17 to $6 through Ladbrokes.com.au before his Randwick win.