Trainer Chris Waller celebrated yet another Group 1 feature race win with his flying filly Hungry Heart backing-up from her win in the Vinery to take out the 2021 Australian Oaks in style. 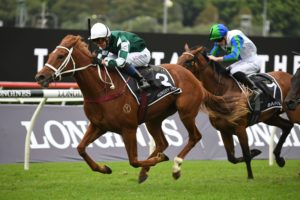 It was the fourth Oaks success by Waller and the Hall of Famer’s 123rd elite level success as a trainer, the beautifully-bred Hungry Heart enjoying her third win on the trot in the Group 1 $1 million The Star Australian Oaks (2400m) at Royal Randwick.

After a confidence-boosting victory over the boys in the Group 2 Phar Lap Stakes, the daughter of Frankel proved her class with a Group 1 Vinery Stud Stakes (2000m) victory at Rosehill a fortnight ago.

She became the first filly to complete the Vinery Stud Stakes – Australian Oaks double since her champion stablemate Verry Elleegant (2019) thanks to a gun ride by Kerrin McEvoy in the latter on Day 2 of ‘The Championships’.

McEvoy enjoyed his 79th Group 1 win having retained the ride on Hungry Heart after the narrow effort in the Vinery, with the filly proving her staying potential over the mile and half in a dominant Oaks performance.

One-time favourite through the week, the Mark Newnham-trained Harmony Rose got a soft lead up front but was disappointing dropping out of it late as the backmarkers made their move.

McEvoy had Hungry Heart travelling sixth throughout with the front-running grey only setting a moderate pace.

As they approached the turn for home, McEvoy got moving on the eventual winner putting her in the picture at the right time and she was far too good down the straight.

Moving up strongly on the outside, Hungry Heart ($5) hit the lead at the 200m and went on to win by a length over the talented Edward Cummings-trained Adrian Knox Stakes winner Duais ($16) who made up all the ground having settled last the first half of the race.

In third rounding out the Australian Oaks trifecta off a beautiful run third the inside was Newnham’s other runner, the rails-drawn Ocean Park filly Bargain ($10) further franking the Adrian Knox form on the quick back-up from her second in that from out wide last Saturday at a big price.