Despite being untested on Heavy going the punters are sticking with the favourite Mugatoo to handle the wet track on Day 1 of ‘The Championships’ and salute in the 2021 Doncaster Mile on Saturday. 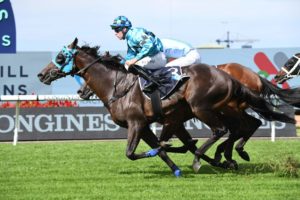 Rainfall late in the week has seen the course proper at Royal Randwick be downgraded to a Heavy (8) ahead of the weekend’s bumper 10-race card headlined by the Group 1 $3 million The Star Doncaster Mile (1600m).

Donning the number one saddlecloth and carrying the equal 56kg topweight from a favourable barrier four draw is the Kris Lees-trained Mugatoo.

The lightly-raced six-year-old hit the headlines last start in Melbourne saluting in the $5 million The All-Star Mile at The Valley at weight-for-age.

He now looks to bring that brilliance back home to Sydney and is at $4.40 in the latest Doncaster Mile odds at Ladbrokes.com.au to do so.

Drawn ideally, Mugatoo presents fit third-up and will be ridden by Hugh Bowman.

With the now Heavy-rated track, nearly all the other runners in the capacity Doncaster Mile field have eased out in betting including the only other single-figure fancy, the Annabel Neasham-trained Mo’unga ($6.50 to $8).

Robbie Dolan will partner the star colt from the second outside alley (21 into 19) with Mo’unga to carry just 49.5kg.

The wide alley could work in favour of the Savabeel three-year-old however giving him plenty of galloping room as he chases another Group 1 win following his success in the Rosehill Guineas (2000m) a fortnight back.

There has been a slight move in Doncaster Mile betting for the New Zealand raider Aegon in from $13 to $11.

Prepared by Murray Baker & Andrew Forsman, the talented son of dual Doncaster Mile runner-up Sacred Falls came to Australia undefeated and took his winning streak up to five on the trot in the Group 2 Hobartville Stakes (1400m) run on a Soft (7) at Rosehill.

Things came undone for him in the Group 1 Randwick Guineas (1600m) when sixth to Lion’s Roar on March 6 when unsuited to the Good (4) track.

He has been kept fresh since, has won a subsequent Warwick Farm trial and should be improving on a rain-affected track this weekend carrying 53kg with Kerrin McEvoy in the saddle.

Equal on $11 having eased out from an earlier quote of $9.50 is the Gai Waterhouse & Adrian Bott-trained Yao Dash on 50.5kg.

The Smart Missile four-year-old won his way into the Doncaster Mile field via the Prelude last Saturday at Rosehill Gardens.

It was a runaway three and a half-length win in the Group 3 over 1500m and Yao Dash carted 53kg making him a livewire chance to become the first horse in history to do the double.

Also on the drift out from $8.50 to $12 is Kerry Parker’s continually underrated So You Think five-year-old Think It Over.

He comes back to 52.5kg here with Glen Boss retaining the ride, but could struggle on the going having failed to finish in the money in his three previous Heavy track assignments.

After the scratching of Mugatoo’s stablemate Gem Song due to lameness, the first emergency Icebath has gained a start in Saturday’s race after being a controversial early omission.

The Brad Widdup-trained mare is another Sacred Falls progeny, the four-year-old suited to a wet track having run second to Colette on a Heavy (9) in last October’s $7.5 million Golden Eagle.

She is rock hard fit ahead of the weekend’s major having had four lead-up runs this autumn, the latest seeing her run fourth in the Group 2 Emancipation Stakes (1500m).

That performance saw Racing NSW handicappers reduce her handicap by two, which forced her out of the original Doncaster field, but she is now in the starting line-up and has firmed from $34 to $21 to win.