The Coolmore Legacy Stakes at Randwick is the next-up option for Matthew Smith’s in-form mare Nimalee following her strong win in the 2021 Emancipation Stakes. 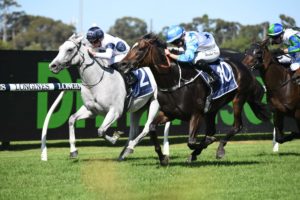 Nimalee (outside) wore down Gresyful Glamour (inside) to win the 2021 Emancipation Stakes at Rosehill. Photo: Steve Hart.

Jockey Rachel King was runner-up one race earlier in the Tulloch Stakes results on Tancred Stakes Day, but was able to go one better thanks to a beautifully-timed ride on Smith’s well-supported favourite Nimalee in the Group 2 $200,000 Emancipation Stakes (1500m).

The punters came in a big way for the four-year-old So You Think mare to add to her strong record at Rosehill Gardens following her lead-up victory at the track in February.

It had been an interrupted preparation for Nimalee however who suffered from a stone bruise, and so Smith was quick to credit the team for getting her back to her best for another win fresh in the Emancipation Stakes this autumn.

“It’s been a long-term plan to get her into some of these better races over the carnival,” Smith told Sky Thoroughbred Central post-win.

“The team’s just done a super job to get her back.”

King rode the mare exactly to plan in a perfectly-scripted and well-executed performance, settling third in the run as Greysful Glamour made the most of a nice jump on a favourably Good-rated track to take-up the lead.

“She (King) was confident about how she wanted to ride her (Nimalee),” Smith said.

“It all worked out today thank goodness.”

On the turn for home, Greysful Glamour was still in front, the mare going up a gear at the 400m looking to go all-the-way.

King however bid her time, moved up at the top of the straight on the outside of the front-runner and lay down the challenge.

It was a thrilling stride-for-stride battle the closing 300m between the brave Greysful Glamour and Nimalee on her outside.

Eventually Nimalee ($4.20) wore down the Mark Newnham-trained Greysful Glamour ($5.50), got the upper hand and hit the lead 50m out from the line to win running away.

In a close third to round out the Emancipation Stakes trifecta at big odds was last start Group 2 Sunline Stakes winner at The Valley Quantum Mechanic ($21) for Mick Price & Michael Kent Jnr.

Smith confirmed plans to run Nimalee next-up on Day 2 of ‘The Championship’s on April 17th in the Group 1 $1 million Coolmore Legacy Stakes (1600m), for which she is now exempt from ballot.

All-in 2021 Coolmore Legacy Stakes odds at Ladbrokes.com.au – available in full here – have firmed in from $26 to $15 on Nimalee, while Greysful Glamour has also been wound in from $21 to $17.