Sydney’s leading lady of racing Gai Waterhouse is in with a chance to win her first Group 1 Australian Derby next weekend with her progressive three-year-old Yaletown securing a start via an all-the-way win in the 2021 Tulloch Stakes. 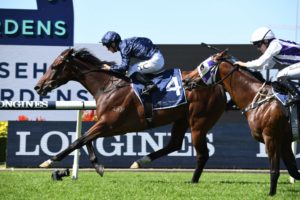 Incredibly, the remarkable training record of Waterhouse is yet to include a victory in the Australian Derby, a statistic her and co-trainer Adrian Bott will be out to change on Day 1 of ‘The Championships’ at Royal Randwick next weekend.

The horse out to do it is Vancover gelding Yaletown who took his record up to two wins from four starts with a third-up victory in the Group $200,000 Tulloch Stakes (2000m) thanks to a peach of a ride in the lead by Tim Clark.

Clark took Yaletown straight to the front on his Tancred Stakes Day assignment at Rosehill Gardens, and led from barrier to box in an improved effort on the lead-up fourth behind Chris Waller’s filly Hungry Heart in the Group 2 Phar Lap Stakes (1500m) on March 13.

In the lead, Clark was able to control the tempo in the Tulloch Stakes and set a nice even tempo to suit the eventual winner who gave a nice late kick over the final furlong to hold off the fast-finishing challengers.

On the line Yaletown ($4.80) had a half-length to spare over the Edward Cummings-trained More Than Ready colt Prompt Prodigy ($31) who ran out of his to finish second after jockey Rachel King gave him a lovely ride third throughout.

Rounding out the Tulloch Stakes trifecta in a close third was then Danny O’Brien-trained VRC Derby placed Young Werther ($7).

“It was great to see him respond under pressure like that,” Bott said of Yaletown, predicting improvement again going up to 2400m in the Group 1 next start.

“We really thought he’d excel stretching out in trip today and it was good to see him tick that off.

“He’ll keep giving for you all day.”

All-in 2021 Australian Derby odds online at Ladbrokes.com.au on Yaletown have firmed in from $51 to $15, while runner-up Prompt Prodigy should they also make the field is in from $67 to $26.