The undefeated New Zealander Aegon heads all-in betting on both the Randwick Guineas and Rosehill Guineas 2021 in Sydney this autumn following early nominations for the two Group 1 features. 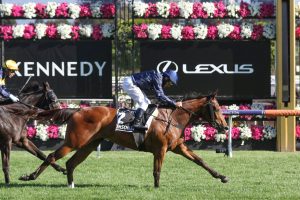 VRC Oaks winner Personal is nominated to take on the boys in the Randwick and Rosehill Guineas events this autumn in Sydney. Photo: Ultimate Racing Photos.

All-in betting at Ladbrokes.com.au on both three-year-old features following early entries is dominated by the Murray Baker & Andrew Forsman-trained Sacred Falls gelding Aegon who is four-from-four ahead of the autumn.

The New Zealander is yet to race across the Tasman, but has been dominating at home with victories in events including the Group 1 NZ 2000 Guineas (1600m) last November and a first-up success on January 23 in the Karaka Million over the same distance at Ellerslie.

That was the idea trial for the up-and-comer who connections have pegged for a raid on the Sydney Autumn Racing Carnival.

The bookies are taking no chances and have Aegon sitting top of the all-in 2021 Randwick Guineas odds at $6 through Ladbrokes.com.au and the $8 favourite to salute over further in the Rosehill Guineas a fortnight later.

The Randwick Guineas nominations attracted 72 three-year-olds including 14 fillies entered to take on the boys.

Standout fillies in the mix looking to be the first since Mosheen (2012) to salute include the Ciaron Maher & David Eustace-trained Away Game, VRC Oaks champion Personal and another New Zealander in Jamie Richards’ NZ Thousand Guineas winner Kahma Lass.

Co-trainer Baker won the Randwick Guineas – Rosehill Guineas double back in 2013 with Dundeel and will be hoping for a second success in both events this season with the all-in favourite.

Meanwhile, nominations for the Rosehill Guineas in 2021 drew 113 young hopefuls.

Outside of Aegon the other top fancies in futures markets for the 2000m event include popular The Vase winner Cherry Tortoni ($12), New Zealand-trained Auckland Guineas winner Rocket Spade ($12) and the VRC Derby third placegetter Young Werther ($12).