Trainer Chris Waller celebrated his first success in the 2021 Magic Millions 2YO Classic results with his well-drawn colt Shaquero appreciating a hot tempo to take out the $2 million feature at the Gold Coast. 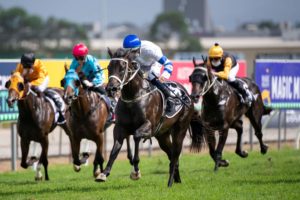 Waller saddled-up three horses in this summer’s $2 million Restricted Listed Magic Millions 2YO Classic (1200m) field and two finished in the trifecta with his nice filly She’s All Class overcoming a horror run to place third.

All honours though went to the winner, Shalaa colt Shaquero, who was drawn to win with barrier one.

Jockey Hugh Bowman allowed the race to unfold in front of him as five or six young juveniles battled for the lead, forcing a breakneck speed that suited the eventual winner.

Bowman bid his time before pouncing on them soon after the turn for home, Shaquero ($13) breaking clear midfield on the straight to dash to the lead and hold off the late comers.

The previously undefeated Toby & Trent Edmonds-trained Better Than Ready colt Alpine Edge at just his third start did well from back in the field to place a brave second, while Waller’s Wong Magic Millions 2YO Classic winning filly She’s All Class was super having been the widest round the bend before her enormous late run for third.

The tongue tie went on last weekend at the Gold Coast and he improved to finish a close second to Finance Tycoon in a 1100m lead-up, which he was able to go one better than from the same gate at the same track on the quick back-up.

“He loomed at the right time of the race and showed a really explosive turn of foot.

“He stripped really fit here today and obviously barrier one plays a big part doesn’t it?

“He showed a great turn of foot like a good colt does.”