The Sandown Stakes is a Group 3 handicap held at Ladbrokes Park in November on Zipping Classic Day. 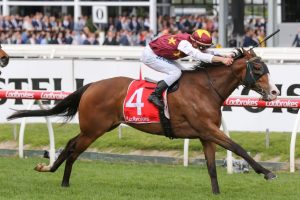 The 2019 Sandown Stakes is a 1500m Group 3 event held at Sandown Racecourse – now Ladbrokes Park – in mid-November on the Saturday after Mackinnon Stakes Day closes the Melbourne Cup Carnival.

Run under quality handicap conditions, the Sandown Stakes is open to all comers and pays $160,000 prize money.

The Sandown Stakes is held on Zipping Classic Day run at Ladbrokes Park. It is the biggest day of racing at Sandown Racecourse and also marks the end of spring group racing in Melbourne. Other races held on the same program include the Group 2 Zipping Classic (2400m), Group 2 Sandown Guineas (1600m), Group 3 Eclipse Stakes (1800m), Group 3 Summoned Stakes (1500m), Group 3 Kevin Heffernan Stakes (1300m) and three listed events, one of which is the 3200m Sandown Cup.

Horses typically target the Sandown Stakes towards the end of their spring campaign. Look to other handicaps held over similar distances for form leading into this race including the Sale Cup (1600m) held at the end of October. Gold Fields (2019) was the last horse to complete the Sale Cup – Sandown Stakes double.

Following the Sandown Stakes, many runners head to the paddock for a break before the autumn. Some choose to head west and compete in races at Ascot and Belmont Park in Perth.

The 2019 Sandown Stakes ran on Saturday November 16, 2019 and was won by the evergreen veteran Gold Fields.

The latest Sandown Stakes 2019 betting odds will be listed below complete with links to the markets at Ladbrokes.com.au for you to take advantage of your Sandown Stakes Tips at the best spring odds.

The official Sandown Stakes 2019 Field & Barriers will be announced on the Wednesday before race and published in full below once released by Racing Victoria.

The Sandown Stakes 2019 nominations are released on the Monday prior to the race and the full list of early entries will be available below as soon as announced.

Inaugurated in 1981, the Sandown Stakes has a relatively brief history, but one that is filled with quality racing. It was initially known as the GJ Coles Stakes. It has also been known as the Coles New World Stakes.

Given Group 3 status in 1984, the Sandown Stakes has played an important role in Sandown racing.

Notable recent Sandown Stakes winners include Swick (2006), Pornichet (2014) and Redkirk Warrior who went on to win the following autumn’s Group 1 Newmarket Handicap (1200m) down the Flemington straight.  Sandown Stakes results, winners and placegetters since 2000 are provided below.