The Villiers Stakes (1600m) is a Group 2 race held at Royal Randwick Racecourse offering the winner a ballot exemption to the following year's Doncaster Mile. 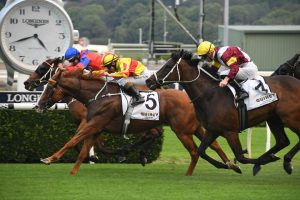 The 2020 Villiers Stakes is a Group 2 event that takes place at the Royal Randwick Racecourse during the end-of-year Sydney Summer Racing Carnival. Conducted in mid to late December, it is an open handicap event run over the middle distance of 1600m and is worth $250,000 in total prize money.

Held just before Christmas each year, the Villiers Stakes is a strong race and a quality black type event on the New South Wales racing calendar. It attracts a good field of fine gallopers and suits horses with experience and proven ability in the mile events.

Although not held in as high regard as the famous Randwick milers, the Epsom Handicap and Doncaster Mile, which occur earlier in the year, it is still a great race for punters to get in on some late betting action in the year at Ladbrokes.com.au.

The Villiers Stakes winner also earns a ballot exemption into the following autumn’s Group 1 Doncaster Mile (1600m) at the track and distance making for a highly-competitive summer miler showdown.

The above average types contesting the Villiers Stakes may have previously contested the Group 3 Festival Stakes (1500m) at Rosehill Gardens a fortnight earlier and often back-up in the Group 3 Summer Cup (2000m) on Boxing Day back at Randwick Racecourse.

The newly created $1 million The Gong held at Kembla Grange in late November also now serves as a nice Villiers Stakes lead-up with Quackerjack (2019) improving on a second in the million dollar feature to win the Randwick Group 2 next start.

Below the latest Villiers Stakes 2020 odds by Ladbrokes.com.au will be provided, once released complete with links for you to back your  Villiers Stakes Tips at the right price this summer.

Quackerjack ($3.80 in 2019) was the last favourite in Villiers Stakes betting to salute for the punters.

The 2020 Villiers Stakes field will be provided here once released by Racing NSW the week of the race.

The 2020 Villiers Stakes nominations will be published below the week of the race.

First run in 1892 when Two Up claimed victory, the event was originally a principal race run over six furlongs. The race length was increased in 1902 to eight furlongs and remained the same until 1972 when the distance was converted to 1600 metres. Not long after in 1979 the event was elevated to Group 3 status before finally becoming a Group 2 race in 1986. In the rich and extensive history of the Villiers Stakes, there has only been one year when the race was not held, 2007 due to the equine flu.