The Zipping Classic (2400m) is a Group 2 staying race run at Ladbrokes Park in late November as a final assignment for Melbourne Cup type gallopers during the spring carnival. 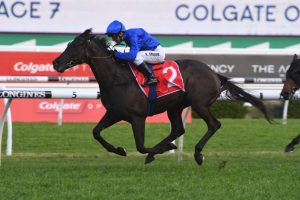 Many of the horses that run in the Sandown Classic will come via the Group 2 Moonee Valley Cup or the Group 3 Queen Elizabeth Stakes, as well as the iconic Group 1 Melbourne Cup (3200m) run over the two miles at Flemington on the first Tuesday of November. The last Melbourne Cup graduate to win the Zipping Classic was Southern France (19th) in 2019.

The 2020 Zipping Classic ran on Saturday November 14, 2020 and was won by the Michael Moroney-trained Sound.

Jockey Jamie Kah celebrated a Sandown hat-trick with a perfectly-timed ride, swooping the field and injecting some pace into a slowly-run race before charging home aboard Sound ($5) in the 2020 Zipping Classic results.

The latest Zipping Classic 2020 odds will be listed below complete with links to the markets at Ladbrokes.com.au for you to back our insider Zipping Classic Betting Tips at the right price.

The official 2020 Zipping Classic field and barriers are released on the Wednesday prior to the race and will be published in full below.

The 2020 Zipping Classic final field features just nine runners led by the Godolphin-raced Avilius out to atone for his second last (22nd) in the Melbourne Cup results.

Click here to read more about the key horses in the Zipping Classic 2020 field and betting markets.

The Zipping Classic 2020 Nominations will be announced on the Monday leading-up to Zipping Classic Day at Ladbrokes Park, Sandown, and will be published in full below once released.

The 2020 Zipping Classic nominations feature 14 stayers including a host of Melbourne Cup graduates led in betting by Surprise Baby, Avilius and Miami Bound.

Many horses contesting races on Sandown’s Zipping Classic Day have run in some of the main events during the Spring Racing Carnival, including the Melbourne Cup.

The Sandown Classic was first run in 1888 and won by Mara however it was originally named the Williamstown Cup before becoming the Sandown Cup and eventually the Sandown Classic. Over the years, the race distance has increased from 11 furlongs to 12 furlongs and 13 furlongs. Second Wind managed to win the event twice in 1930-31, however the true champion of this race is Zipping with four consecutive wins from 2007 to 2010. Zipping’s four straight wins in the Sandown Classic means that the gelding joins Manikato, Tie The Knot and Lord as the only horses to win the same group race consecutively four or more times.