Dramatic scenes played out under the lights at The Valley on Friday night with Scales Of Justice upsetting the favourite Hey Doc in the Australia Stakes 2020 results that were marred by the tragic loss of another galloper. 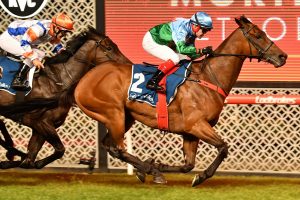 Unable to be saved, the six-year-old had to be euthanised and his hoop Barend Vorster left with a broken collarbone.

Betting on the weight-for-age sprint was dominated by Manuel’s stablemate Hey Doc racing for the first time since his runaway win in Perth’s Group 1 Winterbottom Stakes (1200m).

It looked like the punters would be in for a win as Hey Doc ($2.50) and jockey Luke Currie fought off outside Ashlor to lead the field around, but in the end honours went to the Lindsay Smith-trained seven-year-old Scales Of Justice.

Two-time Group 1 winner Scales Of Justice ($3.70) was given a patient and well-timed ride by Dean Yendall who, despite losing his whip late in the race, charged over the top of the favourite to salute aboard the Not A Single Doubt gelding.

Three-quarters of a length separated the Australia Stakes winner from the beaten favourite, while the Danny O’Brien-trained mare Embrace Me ($18) ran a gallant third just a nose further back.

Smith is hoping more Group 1 success follows over the autumn carnival for the $2.3 million earner who could race next-up on February 8 at Caulfield in the Group 1 $500,000 Neds C.F. Orr Stakes (1400m).

“He’s quite dynamic at the 1200 [metres] so I’ve always harboured a desire to take him to Sydney for The Everest, he handles wet tracks too, so that might be his race down the track,” Smith said post-win on Friday night.

Scales Of Justice now sits top of the all-in 2020 C.F. Orr Stakes odds at Ladbrokes.com.au paying $4 but is at a more generous quote of $21 for The All-Star Mile.