Beautifully-bred young staying filly Daisies raced up to her pedigree getting out to 2000m to post a strong win in the Ethereal Stakes 2021 results ahead of the $1 million Group 1 Kennedy Oaks (2500m) over the Melbourne Cup Carnival. 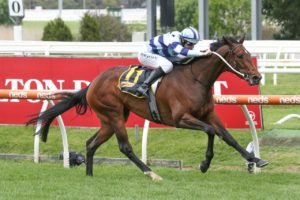 Daisies is into the Kennedy Oaks on the back of a strong 2021 Ethereal Stakes win. Photo: Ultimate Racing Photos.

The Mick Price & Michael Kent Junior-trained daughter of Sebring from Tigress Lily had not run a place until breaking through over a suitable distance on a rain-affected track in the Group 3 $200,000 Ethereal Stakes (2000m) on Caulfield Cup Day.

Relishing the step-up to 2000m fourth-up, she further franked the outstanding form coming out of the Group 2 Edward Manifold Stakes (1610m) where she ran sixth just a shade over four lengths beaten as the fastest home behind Elusive Express at Flemington.

Damian Lane became the fourth hoop to partner Daisies getting the mount in the Ethereal Stakes and produced a masterful ride that co-trainer Price was quick to credit after the race.

“He was smart enough to know how stupidly slow they were going and seize the race,” Price told Racing Victoria.

Lane was posted three-wide fourth the early stages in a slowly-run affair before going up right around the outside mid-race to lead just off the rails.

The push for positions saw the favourite Kapalua Sunset get shuffled right back to last by the turn for home and she was never a threat finishing well back in the field.

Daisies ($10) meanwhile was dominant and too strong over the distance, Lane going for home at the 300m and the filly responding to hit the line one and a half lengths ahead of Glint Of Hope with Biscayne Bay an improved third rounding out the trifecta.

Price confirmed it was straight into the 2021 Kennedy Oaks at Flemington on Thursday November 4 for Daises.

“She’s a beautiful, big winded staying filly and I would say she would go into the Oaks from here,” he said.

“We always wanted to go to 2000m which is why we never ran her in the Thousand Guineas.

“Into the Oaks from here.”

All-in VRC Oaks betting markets at Ladbrokes.com.au on Daises to be the next have her in from $15 to $7 and are available in full here.