Exciting filly Enthaar secured her spot at the top of 2021 Blue Diamond Stakes betting with an all-too-easy victory in Saturday’s Group 3 $160,000 Chairman’s Stakes (1000m) at Caulfield. 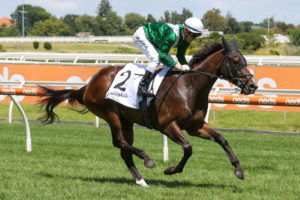 Enthaar saluted in an easy win as the odds-on favourite in the 2021 Chairman’s Stakes at Caulfield. Photo: Ultimate Racing Photos.

The Ciaron Maher & David Eustace-trained daughter of Written Tycoon was in a class of her own as she led from barrier to box to remain undefeated in the Chairman’s Stakes results.

She hit headlines on debut at Randwick last October in Sydney’s Group 3 Gimcrack Stakes (1000m) winning by a runaway three lengths, and was equally impressive first-up in Melbourne ahead of the autumn Group 1 feature races.

The Gimcrack Stakes form was earlier franked at Rosehill with the runner-up Mallory and third placegetter Total Babe running first and second in the Group 3 Gimcrack Stakes (1100m).

Then it was Enthaar’s turn south of the border as she and jockey Mark Zahra combined for a runaway victory as the short-priced $1.24 favourite in the Chairman’s Stakes.

“She was very impressive,” co-trainer Maher told the media post-win.

“She’s always been very obvious. She did that first-up and it’s great to have her back and have a nice run like that.

Just five two-year-olds lined-up in the event and for Enthaar it looked nothing more than a barrier trial as she cruised around in the lead, beginning beautifully and never having to get out of first or second gear.

“She’s going to come on in leaps and bounds.”

The Godolphin-raced Ingratiating tried hard following the favourite around on the outside in second, but didn’t have the motors to match her once on the straight and was quickly accounted for.

Enthaar drew away without challenge, saluting by over two lengths, while the Daniel Bowman-trained roughie Fortunate Kiss ($41) got up for a distant third.

It was an arrogant performance from the filly who will race next-up as the favourite in the Group 1 $1.5 million Neds Blue Diamond Stakes (1200m) back at the track on February 20.

The latest all-in Blue Diamond Stakes odds at Ladbrokes.com.au have Enthaar in from $2.50 to $2.30 and Maher said it was a race he’d love to win after their 2017 favourite Jukebox was scratched the morning of.

“Jukebox was the one, I’ll get over that one day!”

This autumn Enthaar also holds favouritism for the world’s richest race for two-year-olds firming in from $6 to $4.80 in pre-field Golden Slipper 2021 odds online.

“The natural precocity of her at such a young age is the most obvious and exciting thing and she’s just such a big frame and she can obviously use it.”