In a huge performance the front-running Numerian lead from barrier to box to beat home a smart field in an upset 2022 The Q22 result at Eagle Farm on Stradbroke Day. 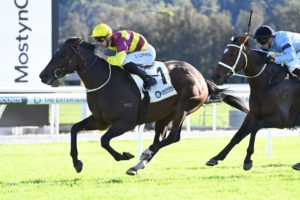 Numerian (pictured winning the Gosford Cup) was too good leading all-the-way for an upset win in the 2022 The Q22 results in Brisbane. Photo: Steve Hart.

Annabel Neasham has now won both editions of the Group 2 $1.2 million The Q22 (2200m) with another masterful training performance seeing the imported Numerian steal the show with a wonderful all-the-way success.

Zaaki was at very short odds in the lucrative showdown last Brisbane Winter Racing Carnival, while stablemate Numerian went around at a blowout price of $21 twelve months on.

“We nearly came via the Doomben Cup but I spoke to Richard Ryan, who very kindly sent me the horse on behalf of Team Valley. He does a great job and obviously I was very excited when he sent him over here,” Neasham told Sky Thoroughbred Racing post-victory.

“The whole idea was to try and chase the good prize-money and the good racing that we’ve got here.

“We hadn’t raced him sparingly at the start of the prep, so we decided to keep his legs fresh for this and I actually rang Richard earlier in the week and said how do you think he’ll go on the good track because he’s got good form on a Good track the couple of times he’s tried it.

“It was a superb ride by Tommy. He took the race by the scruff of the neck.”

Last start winner of the Gosford Cup, the Holy Roman Emperor six-year-old was quick out the gates and taken straight to the front by jockey Tommy Berry.

Never challenged in the lead, the eventual winner was left alone in front while the better fancied runners in the mix including Doomben Cup champ Huetor were taken back settling towards the tail-end of the field.

Numerian led the strong-out field around with around 15 lengths covering them at the 1200m.

As they approached the turn for home, Huetor was still third last and never in the finish as the backmarkers failed to make up any ground once on the straight.

The challenge came from the Chris Waller-trained Kolding ($18) who, after travelling fourth the outside throughout, began to chime trying hard at the 200m.

Numerian however was too strong, never giving up the lead and holding to defeat Kolding, while the fellow Waller-trained roughie Yonkers ($21) finished off well to run third in a very high-paying trifecta.

“Our plan was to dictate the race and there didn’t look a lot of speed in it. We were able to do that, he got into a lovely rhythm for me and just at the 700 I picked it up a bit and from the 600 I really put the foot to the floor and got him into his work,” winning hoop Berry said.

“He was always going to be hard to run down. He probably didn’t get the credit he deserved going into the race.

“I was meant to ride him at Wagga that day and Annabel decided to go to Gosford, so Sam Clipperon won on him there. Full credit to Annabel, she stuck solid and put me back on when she could have easily put Sam on him after winning.

“I get along with him really well. He does himself all the favours in the world. It was a great training effort, it’s been a little while in between runs, but we’re used to getting that from Annabel. It was good.”

“He’s won on soft ground, heavy ground and we’ve found the right trip for him. He ticks a lot of boxes so I’m sure we’ll have a lot of fun with him.”

Race favourite Huetor ($3.60F) meanwhile could only manage to finish 4.55 lengths back eighth in a disappointing performance.

Neasham is now looking ahead to the big weight-for-age races of the spring with her The Q22 winner Numerian.

“He actually had one start last prep and I was quite confident going into the Epsom with him and he got kicked at trackwork that week, so that’s why we only saw him once then,” she said.

“He’s run well every time this preparation and he’s just kept on improving. I think we can probably set our sights on something nice in the spring now.

“I’ll obviously talk to the connections and we’ll work out where we go with him now, but I think after the performance he put in here today he deserves to be set for something nice now.”