Highly-fancied Victorian raider In The Boat is the second scratching out of Saturday’s The Goodwood 2022 field in Adelaide, while General Beau is the early market mover. 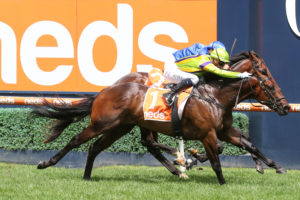 Three-year-old General Beau is the early 2022 The Goodwood market mover ahead of this Saturday’s Group 1 race in Adelaide. Photo: Ultimate Racing Photos.

Lindsey Smith’s Nostradamus four-year-old, In The Boat, was one of the best backed runners to take out the Group 1 $502,250 The Furphy Goodwood (1200m) at Morphettville on the weekend.

A bruised heel has ruled out the last start Sale winner from his predicted on-speed run in the sprint feature however, In The Boat having been expected to cross from his wide barrier 20 draw and set the pace.

He is the second official The Goodwood scratching following the earlier withdrawal of Chris Waller’s dual Group 1 winning mare September Run (18) who was also widely-drawn.

September Run is expected to be targeted for the Brisbane Winter Racing Carnival features over the coming weeks holding an entry for next Saturday’s Group 1 $700,000 Kingsford-Smith Cup (1300m) at Eagle Farm.

The big The Goodwood market mover though is fellow three-year-old General Beau, heavily backed in from $41 to $13.

The Matthew Ellerton-trained Brazen Beau colt is yet to win over further than 1100m and has had four previous attempts at the 1200m before Saturday.

Despite this, the money is rolling in for him to break his six-furlong hoodoo after a lead-up second behind Seradess in Morphettville’s Group 2 Tobin Bronze Stakes (1200m).

He comes right back in weight from 57.5kg that run to 52.5kg on Saturday, and has form around some good horses.

Two back he was under a length off Extreme Warrior in the Bel Esprit when carrying 57kg to the winner’s 54kg, so he meets Saturday’s favourite notably better off for the rematch.

Prior to that in Melbourne he was also excellent at big odds when third, 1.3 lengths off September Run at The Valley in the Group 1 William Reid Stakes (1200m), form he’s out to frank in The Goodwood.

Also firming in The Goodwood odds from $34 to $20 is the 52kg light-weight in the mix, Manhattan Times.

The race’s sole emergency gained a run with the September Run scratching, much to the delight of local trainers Leon Macdonald & Andrew Gluyas.

A three-year-old son of Manhattan Rain, he has an excellent record at The Goodwood track and distance (5:2-1-2), and was last seen running third against his own age in the Tobin Bronze.

“Early in the week I didn’t think he would get in, when he was number 46 or something like that, but when the progressive acceptances came in he was some chance, and then I was a bit disappointed he missed out,” co-trainer Macdonald told Racenet.

“He’s raced very well. He never had any luck the other day in the Tobin Bronze – it was an enormous run.

Other notable market movers include: the Leon & Troy Corstens-trained The Astrologist ($13 into $8) and the defending champion Savatoxl ($21 into $11) who is now the expected front-runner.

The Goodwood 2022 is set to run as Morphettville Race 8 at 3:47pm (ACST) with the latest markets, courtesy of Ladbrokes.com.au, available in full here.