The money continues to roll in for Annabel Neasham’s returning champion Zaaki who is the odds-on and well-backed favourite in 2022 Doomben Cup betting for Saturday. 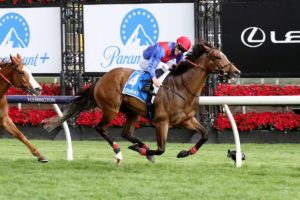 Reigning champ Zaaki is firming favourite to go back-to-back in the 2022 Doomben Cup in Brisbane this weekend. Photo: Steve Hart.

Earlier in the week with markets on the final field were released, the imported star was at $1.55 through Ladbrokes.com.au to secure back-to-back wins in the Group 1 $1 million Doomben Cup (2000m) in Brisbane.

Zaaki is now into $1.50 in Doomben Cup betting presenting fitter second-up and ready to fire at the top level.

While a repeat of last year’s seven-length romp demolition job is unlikely due to a Heavy Doomben track, it remains a far from vintage edition of the Brisbane Winter Racing Carnival feature.

There are nine rivals and few that look capable of matching motors with the well-drawn favourite when Zaaki and jockey James McDonald jump from barrier three.

Last start the seven-year-old was good fresh saluting for the punters on a Heavy (8) at the Gold Coast, successfully defending his title in the Group 2 Hollindale Stakes (1800m).

On class alone, Zaaki looks hard to beat chasing a repeat of the same double he completed last winter ahead of his win in the Group 2 $1.2 million The Q22 (2200m) that is also on the cards again this season.

The in-form grey pays $8 to turn the tables on her last start conqueror after the 41-start veteran went down three-quarters of a length.

She was good the start prior in Sydney blitzing her rivals by over five lengths to win Randwick’s Group 3 JRA Plate (2000m) in the wet, and has her first run at Doomben on the weekend.

“It’s going to be a tough race,” Waller told the media this week.

“I’m not expecting to beat Zaaki, but Polly Grey is racing well, she showed that last start and she is probably in the best form of her career.

“(But) I think he had a bit in reserve last start, he will probably improve with the run and we saw how dominant he was in the race last year.”

Along with the only foreseeable “danger” in the field, Waller has also accepted for Kukeracha, Great House and Kolding.

Kolding however is a potential scratching if the track does not improve.

There has been little change to the Doomben Cup betting markets all week with the Peter & Paul Snowden-trained Huetor steady at $11, and Waller’s surprise Hollindale third-placed Kukeracha at $12.

Along with Zaaki, the only other challenger to firm at all from $26 to $21 is Coventina Bay.

Jumping from the outside alley with Samanta Collett retaining the ride, Robbie Patterson’s New Zealand raider ran four lengths back fifth in the Hollindale last start.

He’s a dual Group 1 winner over the 2000m back home across the Tasman and is expected to improve getting out over that distance in the Doomben Cup.

The 2022 Doomben Cup is scheduled to run as Doomben Race 7 at 3:18pm (AEST) and full markets, courtesy of Ladbrokes.com.au, are available here.