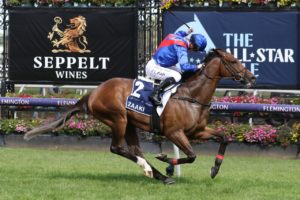 Last year’s seven-length winner Zaaki is back to defend his title in the 2022 Doomben Cup this weekend in Brisbane. Photo: Ultimate Racing Photos.

Annabel Neasham’s star import will face just nine rivals for his title defence in the Group 1 $1 million Doomben Cup (2000m) this weekend, and he is drawn a treat in barrier three for James McDonald.

Group 1 racing for the carnival heads to Doomben Racecourse following last weekend’s Doomben 10,000 meeting that was moved to Eagle Farm due to heavy rainfall.

Ultra-consistent Leroidesanimaux seven-year-old Zaaki is the main attraction chasing dual Doomben Cup wins for the first time since the three-peat of Rough Habit (1991-93).

Last winter he was excellent when demolishing the competition by that runaway margin off a Group 2 A.D. Hollindale Stakes win at the Gold Coast.

He comes via the same lead-up having secured this year’s Hollindale Stakes trophy fresh on May 7 for his first win since the $5 million The All-Star Mile (1600m) at Flemington in March.

Doomben Cup betting at Ladbrokes.com.au on the final field has Zaaki at a justifiably short quote of $1.50 and it looks only bad luck will see the $7 million earner beaten.

Success in the Doomben Cup as the reigning Hollindale Stakes winner will also see Zaaki secure a $200,000 bonus for connections.

Neasham however has warned punters that Zaaki’s best form is on dryer ground and that on Heavy going she would be more than happy for him to win on Saturday by whatever margin.

“I don’t care if it is a photo this time around, a win is a win,” she told News Corp.

“I don’t think he’s as good on the wet but he is in a similar vein of form at home (as last year), he doesn’t seem to be getting any older.

“A couple of the opposition are supreme wet-trackers so I’d prefer a firmer surface.

“It is enjoyable having a horse like him of course, but you do feel an element of pressure.

“When he crosses the line in front – the Hollindale was just relief – which is strange because it should be elation.”

The only other final acceptor at single-figure Doomben Cup odds this season is Chris Waller’s in-form mare Polly Grey at $7.

Jumping from gate seven with Tim Clark in the saddle, seven-year-old Azamour grey Polly Grey has her 42nd career start in the Doomben Cup field.

Two back she won the Group 3 JRA Plate (2000m) at Randwick on a Heavy (8) by over five lengths in a massive effort.

Franking that form, she was last seen running second to Zaaki under a length beaten in the Hollindale, and she is out to turn the tables this weekend.

The other best in Doomben Cup betting is the Peter & Paul Snowden-trained French-bred five-year-old Huetor ($5).

A winner of five of his 14 starts to date and undefeated at the distance, the emerging weight-for-age performer was last seen running fourth in the Hollindale with improvement to come over further this weekend.

Click here for the latest Doomben Cup 2022 odds on the final field courtesy of Ladbrokes.com.au.