The Kiwi staying pedigree was on display in Brisbane on Saturday with the Lance O’Sullivan & Andrew Scott-trained New Zealand raider Dark Destroyer running a lovely Queensland Derby trial to win a wet edition of the 2022 Rough Habit Plate. 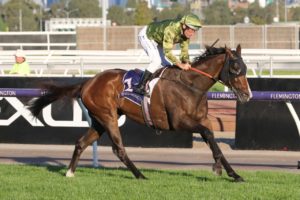 With the Doomben 10,000 meeting moved earlier in the week, this year’s Group 3 $250,000 Rough Habit Plate (2143m) was run at Eagle Farm Racecourse on a downgraded Heavy (8) track and won third-up by emerging Proisir gelding from across the ditch, Dark Destroyer.

Winner of the Group 2 Auckland Guineas (1600m) back home on New Year’s Day, the galloper performed only moderately first-up down under when seventh in the Listed Daybreak Lover Stakes (1400m) in mid-April.

He improved last start when second to Character in the Group 2 Queensland Guineas (1600m) at double figures, and franked that form getting out over a trip for the first time in the Rough Habit Plate much to the relief of connections.

“The weather was so bad…he was so game. He really stuck on well,” co-trainer Andrew Scott told Thoroughbred Central after the race.

“We’re just so pleased he can stay as this was his first attempt covering ground and it’s encouraging going forward in a fortnight.

“I thought it was a good staying effort as he had to sustain a long run, which is pretty encouraging. He’s going the right way.”

Ridden from out wide by Sam Weatherley, Dark Destroyer settled towards the back of the field as Satirical Glory lead them around in the traditional Derby lead-up.

Weatherly began a move going forward approaching the home turn, with the eventual winner travelling strongly to hit the lead 300m out from the line.

The dangers were on-pace runner Menazzi for Sunshine Coast trainer Stuart Kendrick coming three-wide his outside, and Paternal up the inside making up ground.

The Chris Waller-trained emergency out of Sydney, Paternal, was fighting hard rallying up along the rails having been ridden quietly before cutting the corner to drive at the New Zealander.

Dark Destroyer however rose to the challenge, outstaying Paternal to hold on to win after a good battle over the final furlong.

In a brave third running out of his skin was Menazzi.

Dark Destroyer returned to winning form at the right time heading towards the Group 1 $1 million Queensland Derby (2400m) back at Eagle Farm on May 28.

“Hopefully in another fortnight we’ll be back and he should run well again,” Scott said.

Updated all-in 2022 Queensland Derby odds online at Ladbrokes.com.au have Dark Destroyer into $4.50 equal favouritism to win with Alegron and are available in full here.