The brothers Ben & JD Hayes celebrated their first Group 1 success with Mr Brightside flying home late off a perfectly-timed ride to score an upset 2022 Doncaster Mile result on Day 1 of The Championships at Randwick. 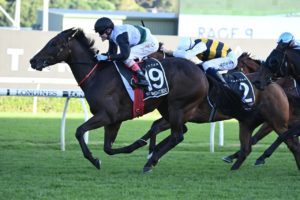 Mr Brightside was good late with a light weight scoring an upset in the 2022 Doncaster Mile results at Randwick. Photo: Steve Hart.

A 50kg light-weight (carried 50.5kg) drawn wide in this year’s Group 1 $3 million The Star Doncaster Mile (1600m), Bullbars four-year-old Mr Brightside was one of the forgotten horses getting around in an outstanding edition of the autumn classic.

“With all of the change we’ve had the past year with Dad (David Hayes) going to Hong Kong and Tom (Dabernig) leaving the partnership, to get a result like this with all of our team is just the biggest thrill. Brightside is a special horse to us. He was our first city winner and first stakes winner in Victoria and now he is our first Group 1 winner, he is a special, special horse,” co-trainer Ben Hayes told the media post-victory.

With a dominant mile record in Melbourne, the Victorian visitor was superior the closing stages racing off to take out the Doncaster on the back of a lead-up fourth to Zaaki in Flemington’s $5 million The All-Star Mile (1600m).

Dropping a huge eight and a half kilos off that weight-for-age lead-up, Mr Brightside was flying in his first Sydney run and handled his maiden run on Heavy going without issue.

“Ever since he ran fourth in the Cantala (in the spring). It’s been a long range plan which has just come into place beautifully and aided by a perfect ride,” JD Hayes said.

The horses coming off the softer lead-ups on better ground south of the border dominated the Doncaster in Sydney, with the runner-up I’m Thunderstruck coming off a second in The All-Star Mile at headquarters.

A four-year-old son of Shocking, I’m Thunderstruck was chasing his first win since last October’s $7.5 million The Golden Eagle and looked the danger on the straight before being outmuscled by the surprise Doncaster Mile winner.

Ellsberg led the Doncaster field around with the heavily-backed favourite Forbidden Love, coming off the Group 1 Canterbury – George Ryder Stakes double, taken forward to settle second on the outside.

On the turn for home, Forbidden Love strode up to hit the lead at the 300m with I’m Thunderstruck working his way into the race to challenge.

It was Craig Williams aboard Mr Brightside ($20) from further back who charged up to take the lead inside the final 60m however, going on to beat I’m Thunderstruck ($6) with class mare Icebath ($21) running yet another placing in third.

“When they come into the yard today, Sydney’s biggest race on the first day of The Championships, as young trainers they just said ‘we’ll leave it up to you – tricky barrier draw’. But they just said this horse is going better than he’s gone this whole prep. So they give me the confidence and then we have to trust the horse and through their hard work and education and their processes that’s the end result, they won a Group 1.

“The way that this horse has come over from New Zealand in one preparation they just took the steps through his grades, really developed this horse. He’s still not a furnished product yet, so really looking forward to an exciting spring now that he will probably be a weight for age horse.

“His attitude was much better today, so he began much better than what he has in his previous first two runs this prep. I was then able to use his natural gate speed, got into a nice position and followed the fellow Victorian (I’m Thunderstruck) which was nice because we also brought you guys some Melbourne weather. He did get off-balanced when the other Melbourne horse pushed me out of the road at the top of the straight.”

“I’m not saying he loved the (Heavy) track but every time I urged him along and asked him to extend he really responded for a horse that really wasn’t that comfortable in the ground. It just shows the quality of this horse and obviously the preparation from the training combination of Lindsay Park, most importantly of Ben and JD Hayes.

The beaten favourite Forbidden Love ($3.20F) was far from disgraced holding on for a credible fourth after they swamped her late.

The stable is yet to confirm next-up plans for Mr Brightside, but there are plenty of upcoming options for the in-form miler.

“He won impressively so we’ll have a good talk about it, (we) don’t make race day decisions,” Hayes said.