It is onto the $4 million Queen Elizabeth to take on Verry Elleegant for the Godolphin-raced Anamoe who made a mess of his rivals with a runaway seven length demolition job in the 2022 Rosehill Guineas results over Converge on Slipper Day. 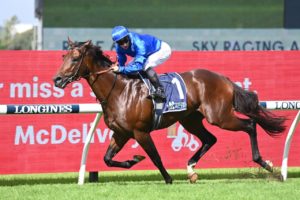 Verry Elleegant may have been beaten as the $1.24 favourite the race prior by Montefilia in the Ranvet Stakes, but the punters had nothing to worry about in the Group 1 $700,000 Rosehill Guineas (2000m).

The James Cummings-trained Anamoe was well-backed to atone for his lead-up second to Converge in the Group 1 Randwick Guineas over a mile and easily turned the tables getting up to 2000m on a Heavy track.

“It has been wonderful for everyone to see what I have been able to see, the potential in the horse….and he has put it on display in a really good race, a classic. He towelled them up. That’s a sign of a quality horse, I think. If that’s not the performance of a champion three-year-old this season, I don’t know what is,” Cummings told the media post-win.

“The horse was here 12 months ago running second in the Golden Slipper after drawing barrier 15 of 15. He is just a pure racehorse, an absolute athlete and he is just a pleasure to do anything with.”

There was some early shuffling of positions with Hugh Bowman unable to hold back Profondo who eventually was allowed to roll out to a five-length lead, while James McDonald found himself parked in front of Converge second upon settling.

Going hard in front, Profondo set a strong tempo looking to steal the show with an all-the-way upset but found himself coming back to the rest of the field as they approached the home turn.

At the 600m Anamoe was creeping into it, he and Profondo going toe-to-toe at the top of the straight before the favourite hit the button 300m out.

Getting serious, McDonald asked Anamoe to go and go the champion son of Street Boss went charging well clear to post a brilliant seven-length win over Converge who tried his best in second.

“Obviously the plan was to get back a bit and let the race unfold, but he began really alertly and sprung into stride, I just didn’t want to disappoint him so I let him go and once he got to the front you could see James (Cummings) pulling his hair out,” winning hoop McDonald said.

“He (Anamoe) was relaxed, Profondo went around because of the slow tempo and that gave him a nice cart up and he did the rest, he’s a pretty smart horse.”

In third rounding out the Rosehill Guineas trifecta was Forgot You, while Profondo was gassed in fourth.

It was the best of Anamoe back on display in the Rosehill Guineas, an ace performance by the colt who looks set for a Randwick run on April 9 during ‘The Championships’ in the Queen Elizabeth Stakes 2022.

“For us, one worry might be it was a little too easy three weeks out from the Queen Elizabeth. We might have to have a little discussion whether he might need one more between now and then to be bang on for that,” Cummings said.

“That’s a pretty exciting performance there. We are very lucky for His Highness Sheikh Mohammed that we’ve got a horse of his calibre that will one day be good enough to join the roster.”

With the Rosehill Guineas result, Anamoe has shot to the top of all-in Queen Elizabeth Stakes betting into $3.50 favouritism through Ladbrokes.com.au as Verry Elleegant eases out to $4.50.

No horse in history has won both the Rosehill Guineas and Queen Elizabeth Stakes in the same year.