Tony Gollan’s returning Magic Millions Snippets winning mare Isotope is considered the sprinter to beat in a full The Galaxy 2022 field at Rosehill Gardens on Golden Slipper Day this weekend. 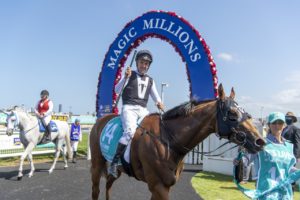 Magic Millions Snippets winning mare Isotope is the favourite fresh in the 2022 The Galaxy this weekend. Photo: Steve Hart.

Saturday’s Rosehill card is headlined by five elite level features including the Group 1 $700,000 The Galaxy (1100m) that has drawn a capacity line-up of short-distance specialists.

Sitting top of The Galaxy odds online at Ladbrokes.com.au is Isotope paying $3.70 and firming to kick off her autumn with a win.

Drawn in barrier 10 for dual The Galaxy winning hoop Kerrin McEvoy, the consistent Deep Field four-year-old races for the first time since her $1 million Magic Millions Snippets (1200m) win at the Gold Coast back in mid-January.

A noted first-up star with three wins and a second from her four previous runs fresh, she remains lightly-raced and has won her only other Rosehill start to date.

Isotope is so dominant in the market that only two other runners join her at single-figures in The Galaxy betting with the rails-drawn Overpass and Brooklyn Hustle out wide in gate 14 equal $9 second elects.

Bjorn Baker’s Vancouver colt Overpass is out to be the first three-year-old The Galaxy winner since Russian Revolution (2017) and is in the right vein of form.

He has had three runs this prep for two wins and a second.

Overpass then went south and won the lucrative Inglis Sprint on March 5 carrying 59.5kg and will relish coming back to 56kg in his Sydney return on Saturday.

Brooklyn Hustle may have a wide alley to overcome, but the Jason Warren & Dean Krongold-trained mare remains in the mix after a lead-up second beaten the barest of margins over 1000m at Flemington earlier in the month.

Of the runners at longer The Galaxy odds those looking to have genuine claims at an upset include the returning Mark Newnham-trained Big Parade ($10); Godolphin’s last-start Group 3 Eskimo Prince winner Paulele ($10) in the outside alley; back-in-form Away Game ($11) from the Maher/Eustace stable; autumn surprise package Shelby Sixtysix ($11); and the Gai Waterhouse & Adrian Bott-trained Golden Rose winner In The Congo ($12).

The Danny Williams-trained Shelby Sixtysix was incredible two back at Randwick coming off a Highway Class 2 to beat Nature Strip (3rd) and nearly get the better of the winner Eduardo as a 50/1 pop in the Group 2 Challenge Stakes (100m).

The genuine wet-tracker then relished another mud course at Rosehill to win the Group 3 Maurice McCarten Stakes (1100m) last Saturday, but would need to go to another level here and is unlikely to get Heavy going.

In The Congo though could be the value runner in the race, the Group 1 winning Snitzel colt fresh in a favourable barrier two draw looking to add to his good 1100m record (3:2-1-0) and atone for his straight track flop when dead last in the Group 1 Coolmore Stud Stakes (1200m) at Flemington.

The Galaxy 2022 is set to run as Rosehill Race 9 at 5:20pm (AEDT) as the penultimate event on Saturday’s card and full markets courtesy of Ladbrokes.com.au are available here.