Co-trainer Gai Waterhouse is in with her shot at an incredible eighth Golden Slipper trophy next Saturday following the 2022 Pago Pago Stakes win by the stable’s gutsy Russian Revolution colt Rise Of The Masses. 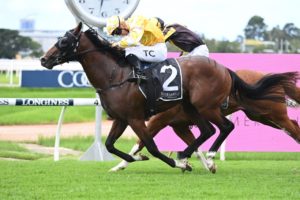 Rise Of The Masses is into the $5 million Golden Slipper field after an all-the-way win in Saturday’s 2022 Pago Pago Stakes. Photo: Steve Hart.

Waterhouse celebrated her seventh success in the Slipper back in 2020 with Farnan in partnership with Adrian Bott and the two return this autumn with another genuine chance.

With the win he has secured his spot in Saturday week’s Group 1 $5 million Golden Slipper Stakes field back at the track and distance where he will be out to become just the fourth in history to do the double.

Ridden to victory by regular hoop Tim Clark, Rise Of The Masses speared through the middle after the jump to hit the lead from Nipotino, while Sweet Ride was travelling with cover third the fence.

There was a gap back to fourth with the favourite Magic one off the fence.

Rise Of The Masses was held together at the 600m before turning in front and leading down the straight.

Coming from last into third and looking a late threat was Williamsburg before they quickly dropped off unable to sustain the challenge.

Sweet Ride ($4) was finishing strongly up the inside, but Rise Of The Masses ($7) dug deep and lifted late to fend off Annabel Neasham’s Black Opal Preview winner and win by a half-length.

In a photo for third, the Hawkes Racing-trained favourite Magic ($2.60F) rounded out the trifecta a further one and quarter lengths beaten.

Rise Of The Masses won the Pago Pago a second slower than Anthony Cummings’ filly She’s Extreme took out the Magic Night Stakes one run earlier, but it was a game performance.

Inspired (1984), Rory’s Jester (1985) and most recently Stratum (2005) are the only horses to have backed-up from the Pago Pago Stakes and claim the feature two-year-old race of the autumn.

All-in 2022 Golden Slipper odds at Ladbrokes.com.au on Rise Of The Masses to be the next are at $26 and are available in full here.