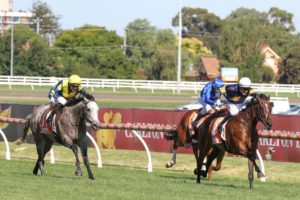 Tofane was excellent first-up with an all-the-way win in the 2022 C.F. Orr Stakes at Caulfield. Photo: Ultimate Racing Photos.

Tiring late in her campaign she was disappointing when finishing a mid-field seventh in the Group 1 Empire Rose Stakes (1600m) on Derby Day at Flemington, but won back the love of the fans at in the Group 1 $750,000 C.F. Orr Stakes (1400m).

“She came out this morning and looked really on her game,” Moroney told Racing.com after the win.

“It was a really good ride by Mark.”

Also returning off his layoff, jockey Mark Zahra produced a brilliant race-controlling ride aboard the six-year-old going straight to the front on Tofane ($7) where she remained from barrier to box.

Not a noted first-up performer, today the mare was impressive building momentum in the lead before giving a lovely kick inside the final furlong to put the result beyond doubt.

“We were left in front and it was a good front running ride,” Moroney said.

“She had them beaten a long way out.

“She’s done a really good job to recuperate (after the spring), so great job to her.”

The eye-catching Ciaron Maher & David Eustace-trained grey Lighthouse gave chase, but couldn’t catch her fellow mare finishing one and a half-lengths back second in a notable rise in grade.

Good late from the back in a close third to round out the C.F. Orr Stakes trifecta was the James Cummings-trained Cascadian ($13), the reigning Doncaster Mile champion in for a good autumn.

Tofane is heading towards $4 million in career prize money now, a mark the broodmare-bound mare could reach over the coming weeks before she is put up for sale at the Magic Millions.

Moroney named the Group 1 $750,000 Futurity Stakes (1400m) back at the same track and distance on Blue Diamond Stakes Day as the likely next-up option.

“Probably the Futurity and either stay here or head up to Sydney,” he said.

“Sydney I’d say will be her swansong and she’ll go through the sales at the Magic Millions.”

All-in Futurity Stakes 2022 betting at Ladbrokes.com.au has Tofane into $6 to be the next with full markets available here.