It is a wide-open betting market for the Magic Millions 3YO Guineas 2022 at the Gold Coast this weekend with a host of runners in the $2 million feature at single-figures to win. 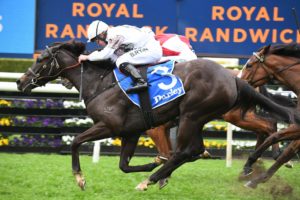 Dual Group 2 winning filly Jamaea is one of the best fancied chances in Saturday’s 2022 Magic Millions 3YO Guineas on the Gold Coast. Photo: Steve Hart.

One of the key events on the bumper Magic Millions Race Day card in Queensland on Saturday, the Magic Millions 3YO Guineas (1400m) field features a capacity line-up this summer.

Included in the starting line-up is the first emergency Snitzonfire for Gai Waterhouse & Adrian Bott coming in for the early scratching Mishani Enchanted.

Two runners are currently battling for top spot in Magic Millions 3YO Guineas betting markets at Ladbrokes.com.au with Jamaea and King Of Sparta equal at $5.

A two-time Group 2 winner having won both the Percy Sykes Stakes and Furious Stakes in Sydney last season, she races for the first time since her credible eighth when only four lengths off In The Congo in the Group 1 Golden Rose (1400m) last September.

Jamaea has been brought on fitness-wise with two good Gold Coast trials this summer and officially races at the track for the first time on the weekend looking to be the first Magic Millions 3YO Guineas winning filly since Flying Jess (2017).

Her biggest threat according to the bookies is the Peter & Paul Snowden-trained King Of Sparta drawn gate 13 for jockey Nash Rawiller.

I Am Invincible gelding King Of Sparta has won two of his 11 starts to date and was last seen running under a length third in the Listed Gosford Guineas (1200m) from December 29.

He is joined in the Magic Millions 3YO Guineas field by stablemate Construct, another son of I Am Invincible with recent good form around Tiger Of Malay.

Along with the co-favourites, another two runners are under double-figures to win this season’s Magic Millions 3YO Guineas with I Am Lethal ($6) and Starman ($8) also being kept safe in betting.

The in-form John O’Shea-trained I Am Invincible colt I Am Lethal boasts a 50% winning strike rate ahead of Saturday and has won his past two starts.

Most recently he ran at the Kensington track on New Year’s Day and posted a big two and a half-length win over 1300m.

Hugh Bowman, who rode the 2011 Magic Millions 3YO Guineas winner Torio’s Quest, comes aboard for Saturday’s race but will need luck from an outside barrier 21 draw.

The Chris Waller-trained Starman fared much better in the Magic Millions 3YO Guineas barrier draw coming up with gate seven for his hoop James McDonald.

Zoustar gelding Starman comes off a runaway three length victory at the Gold Coast track over 1200m from last weekend and is out to hand Waller his first win in the event.

Other notable Magic Millions 3YO Guineas final acceptors include the undefeated Danny Bougoure-trained Spill The Beans filly Indiscreetly chasing a fourth win on the trot and Capitalist filly Shihonka.

Shihonka was last seen running a distant second to Tiger Heart at Doomben on January 1 in the Group 3 Vo Rogue Plate (1350m) that was conducted on a bottomless Heavy (10) track.

She is out to hand co-trainer Waterhouse with her third victory since 2001.