An outstanding edition of one of Australian racing’s biggest prizes takes place in Sydney on Saturday with I’m Thunderstruck heading the field and markets for this year’s $7.5 million Golden Eagle (1500m). 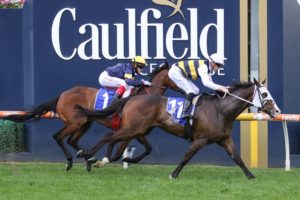 Out again to rival the action of Melbourne’s Victoria Derby Day card at Flemington, Rosehill hosts a bumper day’s racing north of the border headlined by a capacity 2021 Golden Eagle field of four-year-olds.

A winner of his eight starts, the OTI Racing star runs in Sydney for the first time on the back of an impressive three-quarter length win over Tofane in the Group 1 Toorak Handicap (1600m) at Caulfield.

He goes up from just 52kg to 57.5kg against his own age at set weights in the Golden Eagle, but remains the firm favourite with Hugh Bowman to ride from gate 10 – potentially eight with emergencies out.

Private Eye drew barrier 17 in the Golden Eagle field and will come into 14 at best if all four emergencies fail to gain a start.

Nash Rawiller rides the son of Al Maher for the first time in the feature and had a sit on him in a recent Randwick trial running third to Dawn Passage.

Private Eye carried 52.5kg for his Epsom success and will need to be good at set weights from the wide draw on Saturday to post back-to-back victories.

Brisbane’s Desleigh Forster saddles-up consistent Better Than Ready gelding Apache Chase ($11) from a nice gate six draw as the horse looks for a third win on the trot.

The John O’Shea-trained Galileo entire Maximal is also being kept safe in the markets at $10 despite the European import coming up with the extreme outside alley for his Australian race debut.

Annabel Neasham, whose pre-race favourite Zaaki was scratched the morning ahead of his Cox Plate bid last Saturday, looks to get her spring back on track heading to Sydney with the imported duo of Laws Of Indices (19) and Reve De Vol (7) who had mixed luck in the Golden Eagle barrier draw.

Sydney’s best Chris Waller won the inaugural edition of the Golden Eagle back in 2019 with Kolding and has accepted for four in 2021.

Only one of those, Savabeel mare Atishu coming off a close sixth in the Epsom under two lengths beaten, is guaranteed a start with the others making-up three of the four Golden Eagle emergencies.

Aim for Team Snowden, the rails-drawn Ellsberg and the Robert & Luke Price-trained Count De Rupee are among the other standout Golden Eagle hopefuls who ran one – three respectively in the $500,000 Silver Eagle last start.