The 101st edition of the Group 1 $5 million Ladbrokes Cox Plate (2040m) was a thriller, John Allen giving the Irish raider State Of Rest a brilliant ride to drive through and deny three-year-old Anamoe victory before surviving one of the tensest race protests in history, with Australian Racehorse of the Year Verry Elleegant in third. 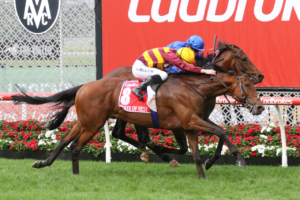 “Thank god we got to win,” Allen told Racing.com after the official protest decision was confirmed.

“Such a great job by Mark and the team and wonderful to get the win.

“Unbelievable really, to win on an Irish horse makes it even more special.”

In a dramatic lead-up to the weight-for-age championship, markets were thrown wide open on race morning with the shock scratching of the early favourite Zaaki due to an elevated temperature.

He was the second horse scratched from this year’s Cox Plate field after French import Gold Trip was withdrawn the day prior from the Maher/Eustace stable on vet’s advice.

That followed on from the devastating loss of last year’s Cox Plate winner Sir Dragonet who sadly passed away last Saturday after breaking down during trackwork.

The drama continued right past the winning post with jockey Craig Williams aboard the gallant runner-up Anamoe from the Godolphin stable lodging a protest against Allen for interference the closing stages.

The James Cummings-trained Anamoe received a budge from State Of Head, prepared by dual Melbourne Cup winning trainer Joseph O’Brien, who shifted in about two horse widths inside the final furlong.

With the winning margin just a short-head, Williams opted to lodge the protest attempting to talk his way into a Cox Plate victory and the jockeys went straight to the stewards’ room.

“Craig’s always a good talker,” Allen said coming out of the stewards’ room with a smile.

“I think the right decision was met.”

It took the stewards some 20 minutes to come to their decision, eventually dismissing the protest and confirming State Of Rest as the Cox Plate winner in 2021.

There was no question about third place in the Cox Plate trifecta, Chris Waller’s always-honest nine-time Group 1 winning Zed mare Verry Elleegant coming from last to finish in the money.

She was 12th in the 2019 Cox Plate and had not raced at Moonee Valley since, but was brave as always making up late ground without ever looking a winning hope.

“It’s unbelievable. Today is nothing but a true reflection in what it took to get his horse here today,” O’Brien’s stable representative Mark Power told Racing.com before the Cox Plate result was put under question with the protest.

“You won’t get stronger than the last 200 from Johnny there.

“It’s just a credit to the whole team at home, it’s just amazing.

“From the moment he got off the plane and touched down in Werribee his work had been really good.

Up until the reason for the protest, Allen had ridden State Of Rest to perfection settling the last start Saratoga Derby Invitational winner in sixth.

It was Peter & Paul Snowden’s Caulfield Guineas runner-up Captivant leading the Cox Plate field after taking advantage of the inside draw looking to go all-the-way with the lightweight.

Two of the three horses in the eventual trifecta, Anamoe and Verry Elleegant meanwhile were settled back second and third last.

The field bunched at the 500m with Verry Elleegant starting her move from the back and they all came down the middle of the track staying off the rails on a deteriorating track.

At the 300m, Allen got the split on State Of Rest with the Irish galloper sprinting clear and Williams following him through on Street Boss colt Anamoe donning the Royal Blue.

The young horse was wearing down the international in an exciting and eventually controversial finish, with State Of Rest just holding on to finish first past the post as the rain started to belt down.

“When the gap appeared I had to ask him to improve quickly before it closed.

“He really fought and he was good and solid to the line.

“It was a ding dong battle, luckily we got our head down on the line.”

Red Anchor (1984) was the last three-year-old to complete the Caulfield Guineas – Cox Plate double and Anamoe was so brave, nearly breaking the drought.

State Of Rest was the first northern hemisphere trained three-year-old to win since Adelaide (2014) prepared by O’Brien’s father Aidan.

“It’s been on Joe’s agenda for such a long time, ever since he seen Adelaide win,” Power said post-protest.

“Johnny Allen was absolutely super on him. It’s just amazing to win this Cox Plate.

“I’m just thrilled and over the moon.

“Luckily we came out on the right side of it.”