The Ciaron Maher & David Eustace-trained Generation showed a great will to win late holding off a fast-finishing Scissor Kick to salute for the punters in the 2021 Red Anchor Stakes on Cox Plate Day. 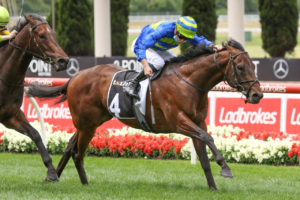 Generation was good saluting for the punters in the 2021 Red Anchor Stakes on Cox Plate Day. Photo: Ultimate Racing Photos.

Progressive Snitzel colt Generation was well supported on track firming notably in the markets ahead of the Group 3 $200,000 Red Anchor Stakes (1200m) and was too strong for his rivals in a potential lead-up into the 2021 Coolmore Stud Stakes next Saturday.

Jockey James McDonald got on the board early riding the Red Anchor Stakes winner in a perfectly-timed performance having settled second behind runaway leader Dosh.

The speedy filly, second last time out in the Group 2 Schillaci Stakes (1100m) where she finished one ahead of Friday night’s Group 1 Manikato Stakes runner-up Bella Nipotina, was brilliant out the gates and went straight to the front.

She set a hot pace looking to go all-the-way, but as was the concern she turned out to be vulnerable at the 1200m and was gone before the turn.

McDonald went up to her and hit the front on Generation having chased the hot speed.

The horse looked vulnerable late with Scissor Step making up all the ground from the back with a huge late run doing the chasing, but Generation pinged his ears back and hit the line well for the win.

In third a notable gap back to round out the trifecta was last start Sale winner Sudoko for the Price/Kent stable.

It was a great return fresh from the lightly-raced colt who has now won three of his five career starts.

Generation was put away for a freshen-up after his previous run at Moonee Valley in early September and could now head to Flemington on Derby Day for a shot at the Group 1 $1.5 million Coolmore Stud Stakes (1200m) down the straight.

“It’s great to see. His last race took a far bit out of him, boss decided to give him a little bit of a freshen up,” co-trainer Eustace told Racing.com after the win.

“I thought he was very brave actually. James did the right thing and got a lovely ride.

“Kicked at the right time, he was strong late so obviously always great to have a winner in these colours.”