This Saturday Moonee Valley is host to the ‘race where legends are made’ with the running of the Group 1 $5 million Ladbrokes Cox Plate (2040m) and below are our insider tips on the Australasian weight-for-age championship. 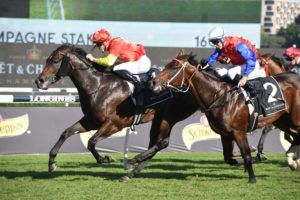 Currently there nine turf stars remaining in the 2021 Cox Plate field after the early scratching of the Ciaron Maher & David Eustace-trained European Gold Trip on Friday on veterinary advice.

New Zealand visitor Callsign Mav meanwhile passed his re-examination after also failing an earlier vet check on Thursday but is right out to $71 in the updated Cox Plate odds at race sponsor Ladbrokes.com.au.

With the Annabel Neasham-trained favourite Zaaki ($2.80) far from a sure thing having failed to win his lead-up when third in the Might And Power, the Caulfield Guineas winner Anamoe ($4) being kept safe to hand Godolphin their maiden success and Chris Waller saddling-up his recently crowned Australian Horse of the Year Verry Elleegant ($5) it is one of the more open and intriguing editions of the weight-for-age classic in recent history.

After going over the Cox Plate form guide, scouring the history books and considering the statistics below are our expert Cox Plate tips and exotic betting selections to take to the bookies.

Neasham’s import has been the favourite for the Cox Plate since his runaway seven-length Group 1 Doomben Cup (2000m) victory in the winter. He looked the next big thing in Australian racing when excellent first and second-up completing the Tramway – Underwood double. He lost a few fans however when going down in a shock loss behind fellow Cox Plate rival Probabeel and subsequent Caulfield Cup runner-up Nonconformist undone in the Might And Power. The bookies are keeping him safe however and history says he can atone. The strike-rate of Cox Plate favourites coming off a last start loss is surprisingly encouraging and the punters are back on him. Comes into an ideal barrier five draw and J Mac replaces Williams, whose tactics in the Might And Power were highly criticised. Our tip? First four.

Waller’s Horse of the Year, this Zed six-year-old is all class. She’s a nine-time Group 1 winning mare looking to hand the stable a fifth Cox Plate trophy after the historic Winx four-peat. Can she get to double-figure Group 1 wins here? The Valley is the concern. She was 12th at her only other run at the track back in the 2019 Cox Plate. No doubt there were excuses that day and she’s gone from strength to strength in the 24 months still, but it remains a question mark. Her last start fourth behind Incentivise in the Turnbull Stakes when out of the money in a Group 1 for the first time has also added a touch of value. She needs to bounce back, answer a few questions and beat a quality field. We think she can do it and if she does, she’ll go down as one of the best ever. Back Don’t Sack.

There only remaining international in this year’s Cox Plate field, the last start Sartatoga Derby winner having won in the US at a big price to earn his bid. Looks a talented type on the improve and has the pedigree of a champion. Represents dual Melbourne Cup winning horseman Joseph O’Brien and profiles similar to Adelaide (2014) who won the race for O’Brien’s father (Aidan) before remaining down under. Son of Starspangledbanner officially down as a four-year-old in Australia and has to go to another level to challenge. The price looks generous and the distance looks a non-issue. Each Way.

Been a big move on Zaaki’s stablemate the two-time Group 1 winning four-year-old into single-figures. Could be found as long as $16 a few days ago, but the money is coming thick and fast as they do the form. Won the Rosehill Guineas over this distance as a three-year-old and jumps from a good gate three draw. First-up winner defeating Verry Elleegant in Sydney’s Group 1 Winx Stakes before a brave second to Incentivise in the Group 1 Makybe Diva Stakes (1600m) in Melbourne. Last start in the Group 1 Epsom Handicap only 1.62 lengths back fifth after jumping from out wide. Smaller field, up to a more suitable distance, fit fourth-up from the ideal gate….no wonder he’s firming fast! Follow The Money.

This Capitalist colt looks well overs based on his lead-up form. Represents Peter & Paul Snowden and is close to $20 while his last start conqueror Anamoe, who he ran just a half-length second to in the Caulfield Guineas, is $4 here. Don’t think he’ll win and has to run out a strong 2000m for the first time in one of the best races in the world from that inside draw, but is one of the roughies with genuine top three claims. One for the Exotics.

Looking for the best Cox Plate betting markets? Head to Ladbrokes.com.au now to lock in our exclusive Cox Plate tips at the right price with the latest odds available here.