Ciaron Maher & David Eustace will not get a chance to secure back-to-back victories in the Group 1 $5 million Ladbrokes Cox Plate (2040m) with their imported acceptor Gold Trip scratched on the eve of the event. 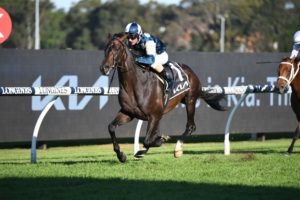 The stable is preparing for an emotional Cox Plate Day on Saturday following last weekend’s loss of the reigning champion Sir Dragonet who broke down during trackwork.

They were to chase successive wins saddling-up the imported Outstrip entire Gold Trip from barrier two with jockey Damien Oliver booked for the ride.

The horse failed to pass a vet check on Thursday and on Friday was subsequently ruled out of the Cox Plate field by Racing Victoria vets upon re-examination at Werribee due to lameness.

Originally set to make his Australian race debut in the Cox Plate, Gold Trip was found to have lameness in both his off-hind leg and off-foreleg with the latter increasing over the past 24 hours according to the vet report.

The panel of six veterinarians were unanimous in their decision that the level of lameness would be too great for the European ex-pat to pass a pre-race vet check forcing the early withdrawal.

“(They) have been unanimous in their decision that the lameness displayed by the horse was not at an acceptable level to pass a pre-race veterinary inspection,” a Racing Victoria statement said.

Prior to the official withdrawal on veterinary advice, co-trainer Eustace had told RSN on Friday morning that Gold Trip was only “mildly lame in his right hind.”

The team had earlier put the horse’s lameness, which had been a concern since the galloper’s arrival down under in late September, down to being stiff from his flight to Australia.

Oliver, who is now without a ride in the Cox Plate, was disappointed with the result and had always backed the stable that the horse was working well ahead through the past week.

“I find it unusual that no one asked me how the horse felt because I am the one putting my neck on the line riding the horse,” he told AAP.

“For me, he’s sound and I have no problems with his action.

“I haven’t volunteered this horse isn’t right. The horse felt fine to me last week when I galloped him.”

Having his final start for John Bary before moving to the care of Danny O’Brien, Atlante five-year-old Callsign Mav is drawn barrier 5 (into 4) with Luke Nolen to ride the multiple Group 1 winning Kiwi.

Callsign Mav has been a huge drifter in Cox Plate betting out from $34 to $71 through Ladbrokes.com.au.

Cox Plate odds are led by the Annable Neasham-trained Zaaki ($2.80) into barrier five with James McDonald aboard.

Zaaki is out to atone for his lead-up third as the beaten favourite in the Group 1 Might And Power Stakes (2000m) at Caulfield.

Upset Might And Power winning mare Probabeel is a $13 chance to salute again in Saturday’s rematch.

She and hoop Damian Lane move into gate eight as the six-year-old daughter of Zed, winner of last year’s Caulfield Cup, having just her second run at Moonee Valley.

The nine-time Group 1 winner was 12th to Lys Gracieux back in the 2019 Cox Plate with excuses, but is being kept safe in an open race two years on.

Godolphin’s Caulfield Guineas winning three-year-old Anamoe is stead at $4 as the second-elect in the markets, Craig Williams aboard the colt who comes into barrier nine looking to hand the Blue Army their maiden Cox Plate victory.

The Peter & Paul Snowden-trained Caulfield Guineas runner-up Captivant represents value at $17 with Dean Yendall aboard from the inside alley.

Dual Melbourne Cup winning trainer Joseph O’Brien saddles-up the sole international raider in the mix with State Of Rest at $10.

The other big firmer in Cox Plate betting now in from $16 to $10 is Neasham’s second runner, dual Group 1 winner Mo’unga into three with Hugh Bowman in the saddle.