Annabel Neasham’s gun import Zaaki enjoyed a soft second-up win in the 2021 Underwood Stakes ahead of his grand final in the $5 million Ladbrokes Cox Plate as Group 1 racing returned to Sandown for the first time in 25 years. 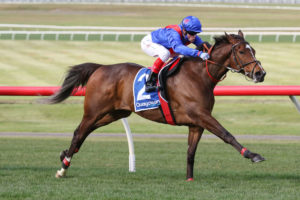 A winter revelation for the stable after a string of wins highlighted by his seven-length Group 1 Doomben Cup (2000m) success, the seven-year-old returned a winner at Randwick on September 4 in the Group 2 Tramway Stakes (1400m).

He jumped odds-on at Ladbrokes Park in the Group 1 $1 million Underwood Stakes (1800m) where the pressure was on in the five-horse field.

Zaaki was out evenly with the rest of the field, but it took jockey Craig Williams a little while to settle the horse who had been very keen pre-race.

In a surprise move it was the Tom Dabernig-trained Fifty Stars who went forward to lead the small field around at only a moderate pace, Williams doing a good job to eventually restrain Zaaki and allow him to race second on the outside of the front runner.

With 800m to go, Williams moved Zaaki up within a neck off Fifty Stars approaching the turn, and from there it was an easy watch for favourite backers.

“Once the settle was on and he perked up, it was good to see him out there doing his business.

“It was always going to be a concern with the tactical affair.

“But he’s such a good horse. He just tries every time and he’s a marvel to have in the stable.”

Fifty Stars dropped off to eventually run dead last, while Zaaki ($1.18) strode clear at the 100m and let down well to enjoy a soft win in what looked like a Group 1 barrier trial for the high-class star.

Having travelled just off the speed fourth the fence throughout then briefly threatening at the top of the straight, Jamie Richards’ classy mare Probabeel was brave running a nice second two lengths off the winner with Superstorm in third.

Williams only had to touch Zaaki with the whip once as the galloper looked to lay in slightly without anything to challenge him.

Improving the further he went, there looks to be great things to come for the European expat as he gets out over further later this campaign in more genuinely run races.

“It’s onto the Caulfield Stakes and the Cox Plate, and that’s the grand final,” he said.

“We want to see him keep the ball rolling.”

Since the Underwood Stakes went to 1800m in 1994, three horses have completed the Underwood – Cox Plate double most recently in 2012 when Ocean Park also saluted in the Caulfield Stakes in between.