Two more sprinters have been locked into the 12-horse The Everest 2021 field for next month with Anthony Cummings’ smart mare Libertini and Friday night’s Moir Stakes runner-up The Inferno both into the world’s richest turf race. 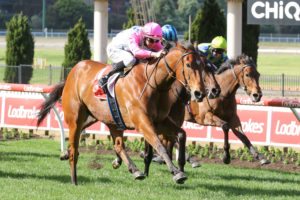 Moir Stakes runner-up The Inferno has secured a slot in the 2021 The Everest field. Photo: Ultimate Racing Photos.

Nine horses are now locked into this season’s $15 million The Everest (1200m), the Royal Randwick feature to run on Caulfield Cup Day on October 16.

Late this week Aquis confirmed Libertini would represent them in the race, the now five-year-old daughter of I Am Invincible looking to improve on her eighth to Classique Legend in last year’s The Everest results.

On Saturday morning, James Harron Bloodstock then announced The Inferno would get his chance in the weight-for-age sprint following an eye-catching second to Wild Ruler in the Group 1 Moir Stakes under the lights at The Valley.

Libertini and The Inferno join fellow confirmed 2021 The Everest horses:

Libertini has not won a race since she defeated Classique Legend in last October’s Group 2 Premiere Stakes and was last seen running eighth to Nature Strip in the Group 1 TJ Smith Stakes (1200m) over the autumn.

“I just think he brings something new to the race,” Harron said.

“He’s been set for the race so he’s going to be fit and hopefully peaking at his fourth start. The 1200m at a big track like Randwick is going to be right up his alley.”

Noted fresh performer, Libertini will not have a lead-up run and so is out to make history as the first The Everest winner to do so first-up.

The latest all-in The Everest odds at Ladbrokes.com.au are narrowly led by Nature Strip, Chris Waller’s superstar last seen running second to the Joe Pride-trained Eduardo in the Group 2 The Shorts.

Libertini is listed at $15 in The Everest betting markets, while The Inferno can be found at $17.

The remaining three slots in The Everest field belong to Coolmore, Yu Long Investments and Godolphin.

Godolphin are likely to name Trekking as their runner off the evergreen seven-year-old’s brave third in the Moir Stakes results.

Click here for the latest The Everest 2021 betting odds courtesy of Ladbrokes.com.au.