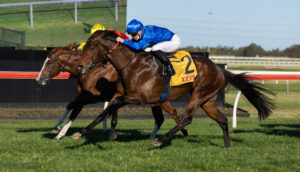 He has his second run at the Rosehill track having placed second to Stay Inside in the $3.5 million Golden Slipper as a two-year-old back in March.

Anamoe ran the ideal first-up trial ahead of the Golden Rose winning the Group 2 Run To The Rose (1200m) at Kembla Grange on September 11.

The youngster now chases the double most recently completed by the fellow James Cummings-trained Bivouac in 2019.

James McDonald retains the ride with the well-supported duo drawn well in gate eight and Anamoe at $1.90 in the current Golden Rose Stakes odds at Ladbrokes.com.au.

McDonald is after his third Golden Rose winning ride, but his first for Cummings, having ridden the John O’Shea-trained winners Exosphere (2015) and Astern (2016).

There are just two other single-figure hopefuls in the latest Golden Rose Stakes betting with Artorius ($8.50) and Remarque ($9.50) considered the dangers.

Anthony & Sam Freedman’s Blue Diamond champion Artorius has had two lead-up runs in Melbourne with the Flying Artie colt narrowly beaten in both.

First-up he was second in the Group 3 HDF McNeil Stakes (1200m) at Caulfield before his second as the beaten odds-on favourite a neck off Mr Mozart in the Listed Exford Plate (1400m) at Flemington with 59.5kg.

He presents fit third-up in Sydney on Saturday at a better price carrying less weight from barrier 11 looking to return to winning form.

Remarque has three-time Golden Rose winning hoop Hugh Bowman aboard from gate five, the Hawkes Racing-trained son of Snitzel third in both the Rosebud and Run To The Rose this prep.

He gets a better gate this weekend and looks an improver returning to Rosehill where he won by two lengths back in January.

The early market mover backed into $10 is the ultra-consistent Gai Waterhouse & Adrian Bott-trained In The Congo in gate six with Tim Clark aboard.

Another Snitzel colt in the mix, In The Congo won the Group 3 San Domenico Stakes two back before his second to Saturday’s favourite in the Run To The Rose only a quarter-length beaten ahead of the rematch.