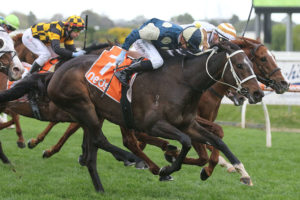 It has been an unusual but ultimately excellent training effort from the stable to get the Darci Braham five-year-old to win the Group 1 $1 million Sir Rupert Clarke Stakes (1400m).

Sierra Sue came off a Brisbane Winter Racing Carnival campaign to run at Flemington, then score the Mildura Cup victory in July with 59kg by over two lengths.

Having gained confidence off that, she was good again in the Group 2 P.B. Lawrence Stakes (1400m) in mid-August saluting in that before a seventh only 1.5 lengths off Superstorm in the Group 2 Feehan Stakes (1600m) at Moonee Valley.

Co-trainer Busuttin said it was a blessing in disguise the mare had not won the Feehan as she would have been penalised in the Sir Rupert, and more likely headed to the Underwood Stakes where an encounter with Cox Plate favourite Zaaki looms.

Instead, she got into the Sir Rupert Clarke Stakes with a very favourable 52.5kg and was ridden to victory by birthday boy Daniel Moor for his first Group 1 success.

It was a lovely line out in the event, with Buffalo River taking up the eventual lead.

Once on the straight there were a wall of horses chasing the front runners across the track, including Sierra Sue who flashed home the final furlong in a brilliant late burst.

She ran down Dice Roll who got his head in front late, but was ultimately denied by the mare.

In third making up all the ground from last in running was the emergency runner, Mick Price and Michael Kent Junior’s untapped Shocking four-year-old I’m Thunderstruck.

Despite Sierra Sue putting her hand up for a potential invite into the inaugural $2 million The Invitation at Randwick on October 23, Busuttin said they were likely to remain in Melbourne for a race like the Group 1 $1 million Empire Rose Stakes (1600m) at Flemington on Derby Day.

“I suppose the Rupert Clarke into the Empire Rose. She’s doing plenty of racing.

“That $2 million race in Sydney’s not bad, but I can’t get up there so we might stay down here.”

Sierra Sue can be found at a current quote of $21 in the all-in 2021 Empire Rose Stakes betting markets at Ladbrokes.com.au – available in full here.