The sky is the limit for Annabel Neasham’s returning star Zaaki who picked up right where he left off with a bullish first-up victory in the 2021 Tramway Stakes ahead of an exciting spring campaign targeting the $5 million Ladbrokes Cox Plate. 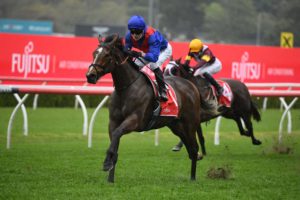 The British-bred Leroidesanimaux seven-year-old won three on the trot in Brisbane during a stellar winter bid headlined by his seven-length victory in the Group 1 Doomben Cup (2000m) and finishing with his Group 2 The Q22 win at Eagle Farm as the odds-on fancy in June.

He was well-supported fresh at Randwick in the Group 2 $200,000 Tramway Stakes (1400m) and was outstanding over a distance short of his best.

“A bit of relief to be honest with you,” Neasham told Sky Thoroughbred Central post-win.

“I knew he was going well leading into this, but I just wondered whether 14 (hundred metres) would be short of his best.

“Obviously he’s got a lot of improvement left in him so we should be in for a really exciting campaign.”

Ridden midfield wide with room by the in-form James McDonald, Zaaki was improving throughout as Man Of Peace led them around in the Tramway.

As they straightened, McDonald hit the button on the hot $2.30 favourite who charged up the middle of the track into the lead and raced away.

It looked like it would be another demolition job by the brilliant galloper, but the margin was reduced as the Chris Waller-trained roughie Aramayo ($41) made up late ground coming from last to run second.

In third rounding out the Tramway Stakes trifecta was the fellow Waller-trained Star Of The Seas ($12) who was also brave after missing the kick and improving from second last to finish in the money.

It was a brilliant return from a genuine spring star and an equally top ride from McDonald who got onto the back of the dual defending champion Dreamforce at the 300m before quickly putting the result beyond doubt.

With options galore ahead, Neasham now has to make the decision of a next-up run for Zaaki who could go to a mile in a race like the $1 million George Main Stakes (1600m) back at Randwick on September 18.

Alternatively, the horse could head to Melbourne and go straight to 1800m in the Group 1 $1 million Underwood Stakes (1800m) at Ladbrokes Park on September 25.

“Just see how he pulls up and work that out next week.

“He’ll certainly have one run down there (in Melbourne) before the Cox Plate, it’s just whether he has two (runs).

“He’s going to be hard to beat wherever he goes.”

The ultimate goal is of course the Group 1 $5 million Ladbrokes Cox Plate (2040m) run and won at The Valley on October 23.

All-in 2021 Cox Plate odds online at Ladbrokes.com.au on Zaaki have firmed into $3.30 and are available in full here.