Flemington’s Group 1 Coolmore Stud Stakes (1200m) down the straight on VRC Derby Day could be the end of spring target for the Ciaron Maher & David Eustace-trained Bruckner following the colt’s nice win over Artorius in the 2021 H.D.F. McNeil Stakes on Memsie Stakes Day. 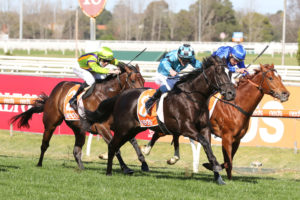 Opting to keep their expensive yearling to 1200m and not head to Sydney for the Group 3 Ming Dynasty on the same day over 1400m, the stable were rewarded as striking Snitzel colt Bruckner got the job done in the Group 3 $200,000 H.D.F. McNeil Stakes.

Jockey John Allen got into the ideal position from a nice inside draw in a small field and took advantage of Bruckner’s fitness edge with the youngster coming off a narrow lead-up win at the same track and distance from the start of the month.

Kept fit with a subsequent winning Warwick Farm trial win a fortnight back, Bruckner still went around at a generous double-figure price with all the money on Anthony & Sam Freedman’s returning Group 1 Blue Diamond champion Artorius.

Artorius fresh however found himself at the tail end of the field and wide around the turn for home, but was still enormous late flashing home the final fifty metres to make-up all the ground and run second.

Having travelled around in fourth then third towards the inside throughout, Allen edged off the fence aboard the eventual winner coming three-wide onto the straight.

Charging up the rails and looking the other most likely was the Godolphin-raced filly Heresy who eventually held for third after that eye-catching return from Artorius saw her miss out on second.

“You can see he’s a little bit keen during the race,” co-trainer Maher told Racing Victoria speaking of Bruckner post-race.

“It was a brilliant ride by Johnny who had to harness him and push out at the right time.

Maher confirmed they were unlikely to stretch Bruckner out in distance this spring, ruling out a bid in the Group 1 Caulfield Guineas (1600m), but that the $1.5 million Coolmore Stud Stakes on October 30 was a potential option.

“I don’t think he’ll go to the Guineas. Maybe he heads towards a Coolmore but there’s a little bit of water to go under the bridge and he’s still furnishing.”