The Gai Waterhouse & Adrian Bott-trained In The Congo was very brave leading all-the-way in the 2021 San Domenico Stakes results to earn a likely Group 1 Coolmore Stud Stakes target down the Flemington straight later in the season. 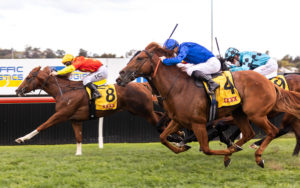 In The Congo (inside yellow cap) was impressive going all-the-way in the 2021 San Domenico Stakes. Photo by: Martin King/Sportpix copyright.

All the money came late for Godolphin’s impressive first-up The Rosebud winner Paulele who jumped the firming favourite with the fitness edge in this year’s Group 3 $160,000 San Domenico Stakes (1100m) moved to Kembla Grange from Rosehill.

It was The Rosebud runner-up In The Congo however who held them all off late in an excellent performance aided by an excellent ride by Tim Clark from an inside gate.

The best out of the barriers, In The Congo went straight out in front as the likes of Mazu and Maotai followed him around.

Peter & Paul Snowden’s returning Group 1 Champagne Stakes winner over a mile, Captivant, meanwhile missed the kick before making up ground to settle fourth in the run.

In The Congo looked vulnerable once on the straight as the resuming Slipper winner Stay Inside and well-supported favourite Paulele started to come late deep out.

The curse of the Golden Slipper winners continued with Stay Inside failing to finish off the final 100m dropping right out late as In The Congo fended off Paulele to win.

In a huge return over the unsuitably short 1200m distance, Capitalist colt Captivant ran out of his skin for third to round out the San Domenico Stakes trifecta ahead of bigger and better things over further this prep.

In The Congo however will be kept to the sprint features over the spring according to co-trainer Adrian Bott who named the Group 1 $1.5 million Coolmore Stud Stakes (1200m) on October 30 as a likely end of campaign Grand Final.

“He was a deserved winner today…he used that tactical speed that he’s got,” Bott told Sky Thoroughbred Central.

“I thought it was a great effort to really fight them off and dig deep late.

“We’ll keep him to the sprint distances. He’s a really out and out speed horse. So we may stay put here with a race like the Roman Consul Stakes next and the Coolmore Stud Stakes being the ultimate aim.”

All-in Coolmore Stud Stakes 2021 betting markets at Ladbrokes.com.au on In The Congo have been slashed from $51 into $17 and are available in full here.