Michael Costa’s Gold Coast-trained galloper Phobetor is the firming favourite to win the Ramornie Handicap 2021 this Wednesday on the opening day of the Grafton Cup Carnival. 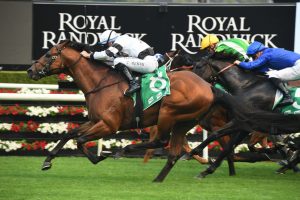 One of the feature races run by the Clarence River Jockey Club, this season’s $200,000 Listed Ramornie Handicap (1200m) features a capacity field of 16 hopefuls.

A winner of six of his 10 career starts, the horse looks to have returned off a year-long let-up having raced for the first time since June 2020 when resuming with a Doomben victory on June 16 this winter.

He won over the 1100m by a narrow margin fresh and should appreciate getting up in distance for the Ramornie.

Proven at the Grafton track and fitter for his return when slow out the gates and eased 300m from the line, Phobetor looks well up to another victory here in tougher company.

Occupying the second line of Ramornie Handicap betting at $5.50 is the widely-drawn Tony Gollan-trained Garibaldi (19) to be ridden by Ben Thompson from the second outside alley.

Last prep the four-year-old I Am Invincible gelding enjoyed four straight wins and is out to return to winning form fourth-up here.

He hasn’t won since February when a 4.5 length victor over the 1200m at Doomben, but has been thereabouts in his three runs this campaign in good company.

Two back he was fourth to Emerald Kingdom in the Group 3 BRC Sprint (1350m) before finishing fifth under two lengths off the winner Superium at Eagle Farm on Stradbroke Day in the Listed Hinkler Handicap (1200m).

Despite the size of this year’s Ramornie Handicap field just two other runners are currently under double-figures for the win with the John O’Shea-trained Southern Lad ($8) and Fender ($8) for Scone horseman Brett Cavanough drawn well in barriers four and one respectively.

Christian Reith partners Ocean Lad six-year-old Southern Lad from that good gate on Wednesday, the horse looking to improve on his close fifth from a wide alley in the Ramornie last year when only one and three-quarters off the winner Signore Fox (2020).

Group 3 placed in Sydney, Southern Lad presents fit and ready to fire on the back of his Hinkler Handicap second last time out and comes back a half-kilo in weight from that to 55kg.

Toronado four-year-old Fender meanwhile has a gun record over the Ramornie distance with four wins from five runs over the six furlongs.

The rails-drawn sprinter has Ben Looker in the saddle with 54kg and is looking to improve on his lead-up sixth at Rosehill in the Listed Civic Stakes (1400m) on June 26 that was further than his preferred distance.

The 101st edition of the Group 1 $5 million Ladbrokes Cox Plate (2040m) was a thriller, John Allen giving the Irish raider State Of Rest a brilliant r…

The inaugural $2 million The Invitation headlines the racing action in Sydney...