There was no love for Tofane in Saturday’s market, but a select group of punters brave enough to back her were rewarded as Michael Moroney’s mare claimed her second Group 1 in the Stradbroke Handicap 2021 results at Eagle Farm.

The daughter of Ocean Park hadn’t won a race in over a year but did look a likely improver coming off a clear second to Emerald Kingdom two weeks ago in the Group 3 BRC Sprint at Doomben.

The five-year-old stormed home from well back in the field that day to land in the money, a performance she managed to replicate thanks to a brilliant steer from champion jockey Craig Williams, who claimed his second Stradbroke in the process. 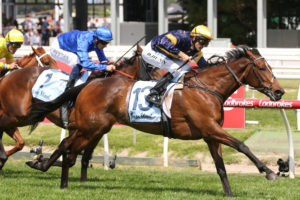 Tofane became a dual Group 1 winner at Eagle Farm on Saturday with a bursting run out wide in the Stradbroke Handicap. Photo: Ultimate Racing Photos.

“After her run last time, we were looking at potential Stradbroke horses. When Philip Stokes decided Instant Celebrity wasn’t going to come up here, after Tofane’s last run I said get me on that horse please, I think she can win for us,” Williams told Channel 7.

Barrier 12 largely explained the $12.90 odds about last year’s All Aged Stakes winner, but considering she won that same race over the same distance (1400m), she was always worth a look each-way.

“I love the way Mike has spaced her runs, she’s now a dual Group 1 winning mare,” Williams went on to say.

“I had to try and restrain her throughout the race because she got a bit inconvenienced throughout, but late she was really strong and very gallant, I’ve got to thank her performance, she was the horse that wanted to win more than any one.”

Last fortnight’s Kingsford Smith Cup winner Vega One looked extremely tough to beat with 250m to spare, but Williams had the right strategy in place to deny Tony Gollan of another Group 1.

“I was actually pretty confident when it was him there after all the talk and the media hype around him, they all said he’s better off a short and sharp run,” Williams said when asked about what he saw at the top of the straight.

Vega One still finished off well for second, while long-shot Signore Fox was the surprise $6.50 place-getter running third.