Saturday turned into a profitable day for punters at Eagle Farm as Gai Waterhouse and Adrian Bott’s lightly-raced gelding Converge took out the Group 1 J.J. Atkins 2021 results over the mile.

A field of 14 juveniles lined up with $1 million in prize-money on the line, only to come up short to son of Frankel, who produced an eye-catching turn of foot out wide to salute as the $2.90 favourite.

In just his seventh career start, Converge was looking to improve on his run a fortnight prior when a narrow runner-up to Saturday’s rival Tiger Of Malay in the Group 2 Sires’ Produce Stakes over shorter.

The promising gelding burst onto the scene late last year with a win at Warwick Farm on debut before returning to the races earlier this year to contest some tougher races in Sydney.

The two-year-old resumed to run sixth in the Group 3 Pago Pago before winning the Listed Fernhill Stakes over the mile at Randwick two runs later.

The soft draw allowed Tim Clark to settle behind the speed out of the gates before creeping up out wide entering the final turn. From there, Clark pressed the button with 300m to spare as the duo shot clear from the rest of the field to win by a comfortable margin. 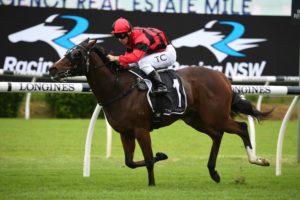 Bott commented after the race that the draw proved pivotal in the run after his horse drew poorly two weeks ago in the Sires’ Produce.

“It was just a matter of holding together and keeping him up to the mark, and I just thought one more run and obviously getting that draw today was key,” Bott told Sky Racing.

“We were able to get all the favours in the run and we were very happy throughout.”

The future looks bright for Converge as the Bott and Waterhouse team begin their plans for the spring.

“We can sort of really go home and dream tonight what could really be possible for his three-year-old career,” Bott went on to say.

“I think the way we’ve seen today and the way he settles in his races he’s certainly got the scope to improve over further, so that certainly opens up a lot more options for him going forward.”

A photo for second saw Giannis get up over Tiger Of Malay by a nose in the JJ Atkins trifecta.