The bookies are having a hard time separating the top stayers in Saturday’s Brisbane Cup 2021 field at Eagle Farm with a host of in-form horses battling for top spot in the markets on the Stradbroke Handicap Day support act. 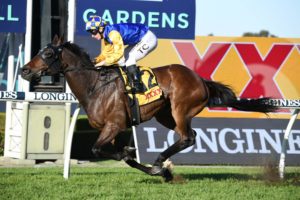 Due to run as Race 4 at 1:14pm (AEST) on Saturday’s race card for the biggest meeting of the Brisbane Winter Racing Carnival, this season’s Group 2 $400,000 Lexus Brisbane Cup (3200m) features a small field of just seven hopefuls.

Currently contested over the traditional cup distance of two-miles, the Brisbane Cup is shaping up as a genuine staying showdown with more than half the field under $10 for the win.

The latest Brisbane Cup odds at Ladbrokes.com.au have the in-form Gai Waterhouse & Adrian Bott-trained Knights Order ($3.20) as the narrow and firming favourite on the quick back-up.

Drawn gate five with Tim Clark to ride on 55.5kg, the Irish-bred So You Think six-year-old goes up two kilos on the weight he carried to victory at Rosehill in last weekend’s Listed Winter Cup (2400m).

He is tipped to complete an interstate Cups double on back-to-back Saturdays despite the rise in distance, class and weight.

The danger occupying the second line of Brisbane Cup betting this season at a close $3.40 is the John O’Shea-trained Rondinella drawn one wider in gate six for jockey Glen Boss.

The Ocean Park mare has form at the testing two-mile distance having run a close second to Selino at Randwick in April’s Group 1 Sydney Cup (3200m).

Her only run since was a lead-up fourth at Eagle Farm in the Group 3 Premier’s Cup (2400m) on May 29 from the outside alley, which she can improve on fitter second-up over further in the Brisbane Cup field.

O’Shea is confident in his runner this weekend and believes the Brisbane Cup could be the right race for the mare to shrug her perennial placegetter status.

“She felt the ground there the other day, no doubt, so we have just spent the first week getting her through that,” he told Racing HQ.

“She has bounced back really well and had a lovely gallop on Tuesday morning. She is a genuine two-miler. She has had two goes at the Sydney Cup and ran fourth and second.

“It (Brisbane Cup) has been the target race for her all along.

“We got a bit bamboozled by the weights. She has ended up at the top of the weights, which may or may not be a reflection of the quality of the race.

“Saturday presents a good opportunity for her to get back in the winner’s stall.”

The other short-priced runner in the mix at $4.20 to carry the 59kg topweight to victory is the Peter & Paul Snowden-trained Carif.

Tommy Berry partners the So You Think five-year-old in the event as Carif looks to go one better than his second in the Premier’s Cup behind Spirit Ridge.

He goes up three kilos on his weight in that lead-up, but should thrive over 3200m having won last November’s Listed Sandown Cup over the distance defeating Real Of Flowers (2nd) and San Huberto (3rd).

Rounding out the single-figure hopes at $6 is then the Ciaron Maher & David Eustace-trained Lord Belvedere, fifth in the Premier’s Cup last time out.