The Group 1 J.J. Atkins over the mile on Stradbroke Handicap Day could be calling for the very talented looking young Rob Heathcote-trained two-year-old Prince Of Boom following his big win in the 2021 Spirit Of Boom Classic – formerly the Champagne Classic – at Doomben. 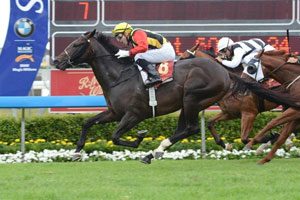 A key early feature on the Doomben 10,000 Day card in Brisbane, the Group 2 $250,000 Champagne Classic (1200m) was renamed in honour of the great Queensland sprint star Spirit Of Boom this season and it was one of his promising young progeny to take it out.

There was a big hype in the lead-up on Heathcote’s Spirit Of Boom gelding Prince Of Boom who headed the markets at $4.40 through Ladbrokes.com.au despite having only debuted a few days ago on May 9 at the Sunshine Coast.

He won a 1000m maiden race at set weights on a Heavy (8) that day by a runaway five lengths and was impressive again going up in grade and distance on the opening Group 1 race day of the Brisbane Winter Racing Carnival.

In-form hoop Ben Thompson retained the ride on the up-and-comer and made it a treble for the day early on when guiding Prince Of Boom to an easy win heading an all-Queensland Spirit Of Boom Classic trifecta.

Making the most of the inside alley, Thompson settled up on the pace as King Kappa led the field around.

Once on the home straight, Prince Of Boom went up the inside and hit the front a furlong out from the line, racing away late for a commanding two and a half-length win over roughie hope Invinsible Tears ($51) with the Chris Munce-trained Berdini’s Girl ($31) in third.

The victory handed Heathcote his fourth Champagne Classic victory since 1999 and back to back wins following his earlier success in the juveniles’ feature with: Chenar (2000), Funtantes (2009) and Rothfire (2020).

Rothfire went on to win the J.J. Atkins next start completing the double that $20,000 bargain buy Prince Of Boom could attempt to emulate this season.

A potential next-up run in the $1 million Group 2 BRC Sires’ Produce Stakes (1400m) Saturday week could follow before the J.J. Atkins at Eagle Farm on June 12.

Prince Of Boom has firmed in from $34 right into $9 in all-in 2021 J.J. Atkins odds at Ladbrokes.com.au – available in full here – and is listed at $7 in BRC Sires’ betting with futures markets on the million-dollar clash available here.

There was no love for Tofane in Saturday’s market, but a select group of punters brave enough to back her were rewarded as Michael Moroney’s mare clai…