The well-backed Dream Ahead filly Marboosha was too good off an on-speed run to score a late win in the Gold Coast Guineas 2021 on A.D. Hollindale Stakes Day at the Gold Coast. 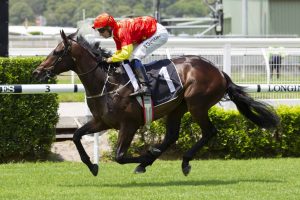 Marboosha was the best backed runner on the card and didn’t disappoint, veteran hoop Jim Byrne reading the race perfectly to slot up from the wide draw (11) to settle second on the outside of the front-runner.

In a race where nothing made up ground from the back, Marboosha ($3.10) was ideally positioned off her on-speed run to wear down the brave leader Tramonto and take out the Group 3 sprint.

It was a wonderful performance by Johnny Field’s 50/1 outside Tramonto, the Wandjina gelding attempting an all-the-way win before being ground down by the eventual Gold Coast Guineas winner in the final 50m.

Rounding out the Gold Coast Guineas trifecta in third was the Michael Nolan-trained Kisukano ($17), the Bel Esprit filly improving notably on her lead-up seventh in Doomben’s Listed Mick Dittman Plate (1100m) from April 24.

Marboosha meanwhile was able to frank the Sydney form in her trip north going one better than her narrow last-start second behind Matchmaker in Randwick’s Group 3 PJ Bell Stakes (1200m) over ‘The Championships’.

Co-trainer Paul Snowden was pleased with the filly’s performance, especially seeing her punch through late to win despite looking vulnerable without cover.

“We needed something to work for us early,” Snowden told Sky Thoroughbred Central post-race.

“She still doesn’t really know how to switch off without cover…she was probably all out late but…she was too good in the end.”

For Paul’s father Peter Snowden the 2021 Gold Coast Guineas results saw him celebrate a fourth win following his previous victories with El Cambio (2008) and Academus (2013) before combining with his son to salute with Hightail (2020).

Hightail backed-up out of his Gold Coast Guineas victory last season in the Group 1 Stradbroke Handicap (1400m) at Eagle Farm, but could only manage to run 12th to Tyzone.

This year’s $1.5 million Stradbroke Handicap is scheduled for June 12 with all-in betting from Ladbrokes.com.au available here.