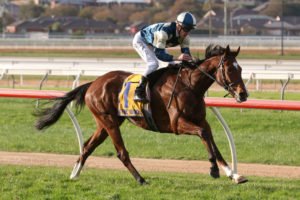 The British-bred son of Leroidesanimaux enjoyed his first win in Australia at ‘The Bool’ carrying a notable 58.5kg to victory in the Listed $253,5000 Warrnambool Cup (2350m).

An improved effort on his lead-up seventh when mid-field at Caulfield in the Group 3 Easter Cup (2000m) a month ago, the gelding relished the rise in distance and was given a gun ride by jockey Mark Zahra.

Despite the big weight, Le Don De Vie ($6.50) had nearly three lengths to spare on the line over the beaten Ciaron Maher & David Eustace-trained favourite Heart Of Puissance ($4) after hitting another gear on the home turn.

The Mitchell Freedman-trained Puissance De Lune mare Moonlight Maid ($12) rounded out the Warrnambool Cup trifecta a further one and a half-lengths back third.

“It was a good win,” winning hoop Zahra said after the race.

“Funny horse. In parts of the race I thought it might be going a bit too keen but then he’d come back and relax.

“But when I asked, and I was milking Blenheim Palace as long as I could to get as good a lead in as I could, when I took over and asked him and put one on his tail, he really put paid to them.”

Le Don De Vie is now expected to head up to Queensland next start chasing the Brisbane Winter Racing Carnival riches in the Group 1 $700,000 Doomben Cup (2000m) back down in distance at weight-for-age on May 22.

Co-trainer Sam Freedman was pleased with the result on Thursday, happy to see the European ex-pat and Melbourne Cup hopeful start to show potential in his second campaign since arriving in Australia.

“Big thank you to all the owners,” Freedman told the media post-win.

“They sent him to us for the spring and he ran a narrow second in the Geelong Cup.

“We knew if he ran up to that today then he’d have a class edge on the field.

“We thought maybe he’d be better on a firm track when he first came out but the longer we’ve got to know him, we’ve learnt that with cut in the ground he’s better.

“He might have a Queensland trip on the agenda now given he won that impressively.

“Something like the Doomben Cup. With the way he’s run there he might get over a bit further as well.”