All Aged Stakes 2021 Results: Kolding Fights Back To Beat Savatiano

Chris Waller’s outstanding galloper Kolding kicked back late in a thrilling photo-finish to defeat Savatiano and come close to the Top 20 Australian prize-earning racehorses in the 2021 All Aged Stakes results. 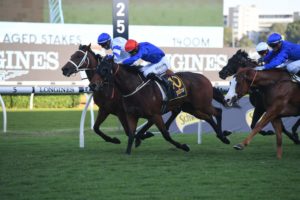 Kolding was excellent winning the 2021 All Aged Stakes at Randwick. Photo: Steve Hart.

The always-honest and often underrated Ocean Park five-year-old Kolding took his earnings well over $6 million celebrating his third Group 1 success with conditions to suit in the $600,000 All Aged Stakes (1400m) at Royal Randwick.

Back at his pet track on Good going, Kolding was able to atone for his leadup 10th when unsuited to the Soft (7) course at Rosehill on March 27 in the Group 1 George Ryder Stakes (1500m).

It was his first victory since defeating Avilius by two lengths in last October’s Group 2 Hill Stakes (2000m) and gave Waller his second All Aged Stakes success following the trainer’s 2009 win with Danleigh.

Jockey Brenton Avdulla came aboard for the ride and got the eventual All Aged Stakes winner into a lovely position in third throughout as Dreamforce led the field around.

Avdulla moved off the fence once on the straight, just forcing the Godolphin-raced Savatiano and jockey Hugh Bowman to shift out a little wider on the run home.

Also coming through the field with a big late run was another of the James Cummings-trained chances, upset last start Doncaster Mile hero Cascadian ridden by the season’s best Ms Jamie Kah.

It was Kolding and Savatiano fighting it out the final furlong and it looked like the mare was going to win as she got her head in front.

Kolding however proved his warhorse status and would not go down, giving another final kick to narrowly deny Savatiano and salute in the race while Cascadian closed off hard to finish off the All Aged Stakes trifecta in third.