The Peter & Paul Snowden-trained Wild Ruler continued his undefeated Randwick record with a return to winning form in the 2021 Arrowfield 3YO Sprint results. 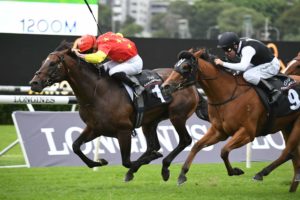 Wild Ruler held on narrowly to win the 2021 Arrowfield 3YO Sprint at his pet Randwick track. Photo: Steve Hart.

Drawn the outside alley in this year’s Group 2 $1 million Arrowfield 3YO Sprint (1200m) was ideal for the smart Snitzel colt who made it four-from-four at Royal Randwick thanks to a strong ride by James McDonald.

Last spring, Wild Ruler produced a two-length win in the Group 2 Roman Consul Stakes (1200m) at the same track and distance as the Arrowfield when saluting as the odds-on favourite with McDonald aboard.

The horse went on to finish third down the Flemington straight behind September Run in the Group 1 Coolmore Stud Stakes (1200m), before returning on March 6 to carry 59kg to victory in Randwick’s Listed Fireball Quality (1100m).

Things went amiss last start when he got zero luck in the run at Rosehill to finish a well-beaten sixth behind Eduardo in the Group 1 The Galaxy (1100m) when ridden by Kerrin McEvoy.

Back to Randwick over the 1200m against his own age with McDonald in the saddle proved a winning combination as Wild Ruler ($6) just held off the late-lunging Tony Gollan-trained filly Isotope ($3.30F) to win the million-dollar showdown on Day 2 of ‘The Championships’.

McDonald had Wild Ruler racing three-wide in third with no cover the early stages before making his move on the home straight and hitting the front 175m out from the line.

It was an exciting finish as the well-backed Queensland visitor Isotope, currently stabled with the Snowdens in Sydney, gave chase and finally got into clear running the closing stages to charge home and force a photo-finish.

She just missed out on the win by the bob the head, while the now Annabel Neasham-trained Prague, last seen running fourth in the Group 1 Newmarket Handicap at Flemington, ran well for third.

“Peter and Paul (Snowden) were very wrapped that he drew out there (in barrier),” McDonald told Sky Thoroughbred Central post-win speaking of Wild Ruler.

“He toughed it out towards the end, he’s a good colt and good to get this race on his CV as he’s very good on his day.

“He’s got a good will to win, he tries very hard, I’m sure he’ll carry on with his good fortune.”