Joe Pride’s evergreen seven-year-old Eduardo is out to carry the top-weight to victory in testing conditions in Saturday’s 2021 The Galaxy at Rosehill Gardens on the back of a Group 2 Challenge Stakes victory. 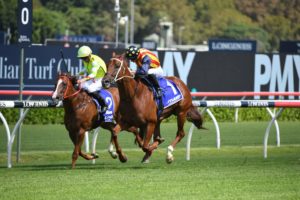 The Host gelding is one 13 sprinters accepted to do battle in the Group 1 $700,000 The Galaxy (1100m) on Golden Slipper Day should racing go ahead.

The hugely popular Sydney Autumn Racing Carnival meeting is under threat with Rosehill rated a Heavy (9) on Friday and more rain on the forecast.

As it stands, The Galaxy betting at Ladbrokes.com.au lists Eduardo at $7 to salute with 58kg from barrier eight with Nash Rawiller retaining the ride.

Rawiller guided the galloper to victory first-up in Randwick’s Challenge Stakes at 1000m and the horse has an even better record at Rosehill.

Eduardo is also a proven wet-tracker with two wins from three starts on Heavy going in another boost ahead of his shot at the Group 1 event.

Sitting top of The Galaxy odds at $4.40 and firming is the big market mover Tailleur who the punters have come for in a big way.

The in-form Godolphin-raced Shooting To Win mare opened at $8.50 but her price has been slashed as the rain falls.

The four-year-old absolutely swims boasting three wins and a second from her four past runs on Heavy going and she is unbeaten at Rosehill Gardens.

This is a notable rise in grade for her, but she was eye-catching as the odds-on favourite in mid-February’s Group 3 Triscay Stakes (1200m) and she gets in with just 51kg on her back here.

Occupying the second line of betting at $5 is one-time favourite, Chris Waller’s returning Haut Brion Her.

The five-year-old Zoustar mare runs for the first time since her close second behind Gytrash in Rosehill’s $1 million Winners Stakes (1300m) run on a Heavy (9) last October.

Along with Eduardo, there are a further two $7 third-elects with Mick Bell’s veteran mudlark Jungle Edge backed in from double-figures and the Peter & Paul Snowden-trained Wild Ruler drawn in barriers 12 and 11 respectively.

Ten-year-old Jungle Edge continues to show-up on big days like this when conditions suit.

The Galaxy will mark his 20th start on Heavy going and with eight wins in the mud to his name, along with a further six minor placings, he presents as a definite top three chance.

Jungle Edge chases his first win since July last year in Caulfield’s Group 3 Sir John Monash Stakes (1100m) and is out to atone for his last as a 70/1 roughie in the Challenge Stakes run on an unsuitable Good (4).

He comes right back in weight to just 52kg this weekend, but is yet to race in the wet and how he handles it and the rise in class will be key.

The Group 2 winner took out the Roman Consul Stakes last October by two lengths in Sydney before his third to September Run in Flemington’s Group 1 Coolmore Stud Stakes, so is certainly versatile and deserving of a chance here.

Click here for the latest The Galaxy 2021 betting odds courtesy of Ladbrokes.com.au.