Star Kiwi young gun Aegon is the one to beat again as the undefeated galloper looks to dominate the 2021 Randwick Guineas results in Sydney on Saturday. 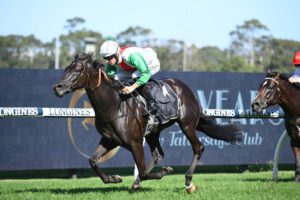 A winner of all five of his starts coming into the famous mile showdown, the Sacred Falls gelding chases a second elite level success.

He took out the Group 1 NZ 2000 Guineas (1600m) last November at home before a first-up Karrakatta Millions victory over the same distance in January also across the Tasman.

Aegon debuted down under on February 20 in Rosehill’s Group 2 Hobartville Stakes (1400m) and was in a class of his own powering home to a nearly two length success over the locals.

The Hobartville has been the key form race into the Randwick Guineas over the years with Dissident (2014), Hallowed Crown (2015), Kementari (2018) and The Autumn Sun (2019) all recently completing the double.

Now the money is on Aegon to be the next getting back up to his pet distance and drawn a treat in gate eight with Hugh Bowman – winner of the Randwick Guineas aboard Hallowed Crown in 2015 – retaining the ride.

The latest Randwick Guineas odds online at Ladbrokes.com.au list Aegon at $2.30 and he’ll take the power of beating in the classic.

Three other runners in the Randwick Guineas field are listed under $10 in the markets including the $6.50 second elect Mo’unga in gate two with Tommy Berry to ride the now Annabel Neasham-trained Savabeel colt.

Formerly with Chris Waller, Mo’unga debuted for his new trainer in the Group 3 CS Hayes Stakes (1400m) in mid-February ant Flemington and ran a credible third to Tagaloa.

He heads back up to Sydney for the Group 1 on Saturday for his Randwick debut, but has winning form this way of racing have taken out the Listed Dulcify Quality (1500m) at Rosehill last September.

Peltzer has the outside alley (13) to overcome this weekend as the well-bred So You Think colt looks for another Randwick mile win following his $1 million Bondi Stakes (1600m) victory at this track and distance last October.

He resumed at the course in early February with a first-up Group 3 Eskimo Prince Stakes (1200m) win before finishing fourth in the Hobartville and will relish getting back to Randwick this weekend.

North Pacific is also a Hobartville graduate out to turn the tables on the New Zealand champion having run second in the same key lead-up.

Of the double-figure runners those representing potential value include Prime Star ($16) who doesn’t know how to run a bad race coming off a string of feature race placings including a third in the Hobartville and the progressive Mark Newnham-trained Harmony Rose ($16) who is the sole filly in the mix.