Adelaide’s Group 1 The Goodwood this May could be on the agenda for the promising Portland Star after the Matt Laurie-trained colt upset the big guns in Caulfield’s Group 3 $160,000 Manfred Stakes (1200m) on Saturday. 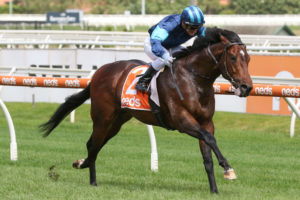 The nicely-bred son of Deep Field made it two stakes wins from six starts when he atoned for his last start flop from the start of the month in Brisbane.

The Group 3 Red Anchor Stakes winner at The Valley on Cox Plate Day was disappointing first-up in the Group 3 Vo Rogue Plate (1400m) at Eagle Farm finishing dead last (17th) after failing to run out the 1400m fresh from out wide.

“Happy to put a lone through that run up in Queensland for obvious reasons,” Laurie told the media post-victory on Saturday.

“He trialled beautifully last week and I was very happy with him coming here today.”

The horse won back plenty of love second up back in Melbourne on Chairman’s Stakes Day, jockey Luke Currie leading him to a surprise all-the-way win in the autumn lead-up.

Portland Star went up to take the front spot in a muddled start ahead of the Caulfield Guineas runner-up Aysar, while last year’s Blue Diamond champion Tagaloa got caught three-wide on the track in third throughout.

It was a tight and compact group going around at only a moderate pace before they upped the ante on the home turn and it became a genuine sprint for the line on the straight.

Portland Star ($9) held his lead narrowly at the 200m and fended off the better fancied stars over the final furlong eventually crossing three quarters of a length ahead of the Lindsay Park-trained Aysar ($2.50F), with Tagaloa ($2.90) a close third.

While there were excuses for Tagaloa off the wide run, Aysar looked to have had his chance tracking second throughout giving extra merit to the win by Portland Sky at the bigger odds.

“He’s got good tactical speed, he can relax, and he’s got a good sprint,” Laurie said of his Manfred Stakes winner.

“He’s always shown us plenty right form a young horse and we’ll no doubt get the opportunity to run him in something better.

“I think (we’ll keep him to the) sprint trips we were thinking of Adelaide. but we’ll have to think about it now.”