All the money in Magic Millions 3YO Guineas 2021 betting at the Gold Coast on Saturday is on the flying Tony Gollan-trained filly Isotope who is at short odds to win the $2 million feature on Magic Millions Day. 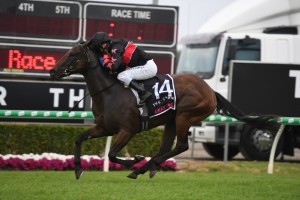 Away Game won the 2020 Magic Millions Classic and returns for a shot at the Guineas on the weekend. Photo: Steve Hart.

A capacity field of three-year-olds is engaged for this season’s $2M Gold Coast Magic Millions 3YO Guineas (1400m) with the hot favourite Isotope drawn ideally in barrier seven with Ryan Maloney to ride.

Gollan’s in-form daughter of Deep Field has won four of her seven career starts including back-to-back Doomben victories leading up to her tougher assignment on Saturday.

Kept fit in the meantime with a Gold Coast barrier trial at the start of the month, Isotope has her first official start at the track on the weekend and is at a current of $2.50 in the latest Magic Millions 3YO Guineas odds at Ladbrokes.com.au.

The danger occupying the second line of Magic Millions 3YO Guineas betting at $4 is proven Gold Coast and Magic Millions Day performer, the classy Ciaron Maher & David Eustace-trained Away Game.

The star daughter of Snitzel enjoyed a stellar juvenile campaign last summer – autumn winning the $2 million Magic Millions 2YO Classic before a Group 3 Randwick win, Blue Diamond fourth in Melbourne and brave second in the world’s richest race for two-year-olds behind Farnan in the $3.5 million Golden Slipper.

A Group 2 victory at Randwick in the wet followed before she was far from disgraced when fifth under three lengths beaten against the older mares in Adelaide’s Group 1 Robert Sangster Stakes (1200m).

Away Game looked good fresh in the Gold Edition when just beaten, subsequently beat Isotope in the same lead-up Gold Coast trial and has plenty working in her favour second-up in the Guineas for the rematch.

Outside the dominant two fillies the other best in Magic Millions 3YO Guineas betting this Queensland Summer Racing Carnival include Forbidden Love ($5.50) in barrier four with Jim Byrne aboard and the seemingly forgotten Gotta Kiss ($14) who has been thereabouts all prep.

The Richard & Michael Freedman-trained All too Hard filly Forbidden Love is a four-time winner from nine runs and was a spring flyer for the stable with form around star fillies Dame Giselle and Hungry Heart.

She was excellent when third only a half-length off the winner Shout The Bar at Flemington on VRC Derby Day in the Group 1 Empire Rose Stakes (1600m) last October and returned a winner on December 29 saluting on a Heavy (8) track in the Listed Gosford Guineas (1200m).

Gotta Kiss meanwhile comes off back-to-back seconds, the Not A Single Doubt filly having been in the money behind Isotope in the Mode Plate before her last start effort behind Apache Chase in Eagle Farm’s Group 3 Vo Rogue Plate (1400m) on January 2.

Still at an outside price but firming meanwhile, the early Magic Millions 3YO Guineas market mover is Shooting For Gold ($51 into $31) who has drawn out in the carpark but is still getting some love from the punters coming back against his own age on a quick seven day back-up.

Click here for the latest Magic Millions 3YO Guineas 2021 betting odds courtesy of Ladbrokes.com.au, the race due to jump as the Gold Coast Race 7 at 4:00pm (local AEST) on Saturday.